Getting students out of their comfort zones 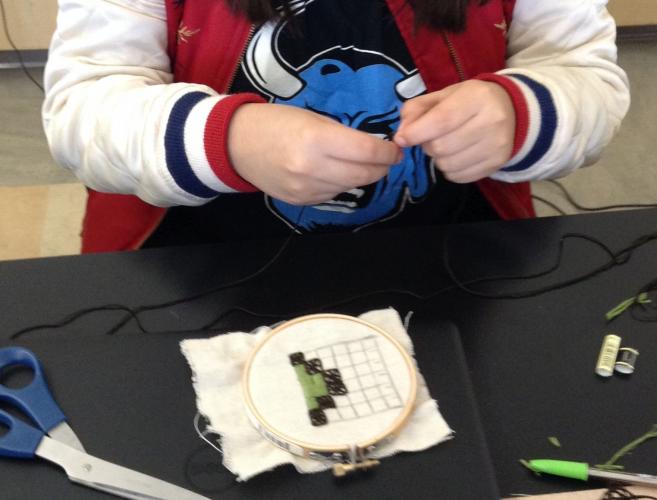 With Spring break over, it’s really time for the students to start thinking about their Maker Faire projects. Since the Maker Faire is May 20th, the students have six weeks to plan their project but complete it. Although some students have had projects in mind all year, others haven’t even begun to think about it. To help the latter get a good idea, we created a fun and helpful brainstorming activity for them!

We wanted to use the activity to get the students out of their comfort zone, even if it was only by a little bit. Part one of the worksheet asked the students to come up with (in any way they wanted- draw about it, write about it, etc.) two projects in their comfort zone, and two projects out of their comfort zone. This way, they’d be able to at least think about a complicated project and hopefully get excited about it enough to give it a try. The second part asked them to draw out their favorite one, then get opinions from their peers about how they could potentially “amp up” their projects. This part of the activity was another attempt to bring their projects outside of the box they usually stay in. The third part asked them how people at the Maker Faire would interact with them or their projects- either talking to the student about the project or actually using the project. The fourth and final part was all about planning- creating a materials list, breaking it into steps, then placing it all on a timeline.

Although some students got more out of the worksheet than the others, it seemed they all at least thought about their projects in a way that was more structured than they would have before. Some students who particularly benefited from the worksheet were Tonya, Carl, and Dante (all pseudonyms, of course). Tonya’s worksheet was done so efficiently- she created two great comfort-zone projects and two great starts for out-of-her-comfort-zone projects. Each one had a written portion and a drawn out picture. She couldn’t decide between a hand sewn backpack and a large embroidery piece at first, then realized she could amp up the project by making an embroidered backpack. Carl had a hard time with the worksheet at first- he took more than half of the three hour class period just staring at the page and googling inspiration. Finally, he came up with one great idea that ended up being out of his comfort zone! He plans to make a bulletin board lit up by LED lights. Dante came up with a great project that encompasses graphic design skills- he is already creating a 3D print design of something he calls “scissor-hands” (not like the movie) that he will be able to use to grab things out of reach.