The Monitoring Milkweed-Monarch Interactions for Learning and Conservation Project (MMMILC) is a long-term ecological monitoring research project run out of UC Davis. The goal of the project is to better understand the interactions between milkweed plants and monarch 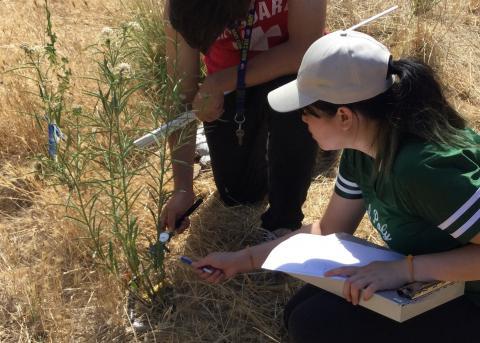 butterflies that rely on the plants through multiple life stages. In a changing climate, long-term monitoring of native pollinators is crucial for learning more about entire ecosystems. Each summer, a group of high school interns participate in MMMILC activities as part of a career-focused internship program run by the Center for Land-Based Learning (CLBL). Monitoring activities take place at a suburban green belt. Interns come from cities surrounding the greenbelt. After training and a certification exam, they visit the site weekly to assess the status of milkweed plants and take photographs for a group blog. Dr. Yang writes a weekly update with ongoing analysis of the data interns have collected.

Once a week, the interns  collect data on milkweed size, development, and monarch interaction. They count and measure stems, pods, and umbels, determine the percentage of the plant that is green and the percentage of leaves that have been damaged by herbivory, and document presence of monarch eggs and caterpillars.

Milkweed plants were planted two years ago along a section of a former agricultural irrigation channel. Restored to provide recreation opportunities and wildlife habitat,  the greenbelt lies between agricultural fields and a suburban neighborhood. Local residents walk, run, ride bikes, and walk their dogs on the paths that run alongside the restored area.

In the summer, 6-18 high school students, ages 15-18, spend one day a week with MMMILC as part of a paid work development internship. Participants come from a range of racial, ethnic and economic backgrounds. While some come from the small city where the greenbelt is located, a majority come from a larger urban area nearby.

The participants collect data during the summer which contribute to a larger year-round project created and run by UC Davis entomologist, Dr. Louie Yang. Participants are trained by Dr. Yang and project staff, then mentored by undergraduate students for the first few days of fieldwork. They conduct monitoring with support from CLBL educators and input data at a computer lab on the university’s campus.

Youth interns participate for approximately 3.5 months over the summer.  Some interns continue longer, monitoring during spring and fall, or returning to the program for a second or third summer.  The MMMILC Project has been running in partnership with Growing Green for two years and will continue to be funded through at least 2017.

MMMILC is a National Science Foundation (NSF) funded research project housed at the University of California, Davis. Intensive summer monitoring is accomplished through partnership with a local environmental education organization, the Center for Land-Based Learning, and their summer internship program, Growing Green. The university research project’s goal is to introduce interns to science research experience and collect long-term monitoring data.  CLBL’s internship exposes youth to a variety of career opportunities and tools to promote college and career readiness.

Each week, at least one youth intern is assigned to create a blog entry with pictures taken during data collection.  As part of their broader internship, interns also work on a local organic farm and attend community college classes. For the MMMILC project, Dr. Yang and his undergraduate students partnered with the city and several other local organizations to plant several hundred native milkweed plants in the greenbelt.

Several resources were created for this project, including – a training session presentation, monitoring certification exam, monitoring protocol, and a monarch larvae identification sheet. Check back here soon for more details and downloads.

Throughout the program, interns often shared pictures of caterpillars and other interesting insects with the project scientist and on social media. Additionally, each week a different MMMILC intern took on the role of “blogger” and shared a highlight or anecdote from that day’s monitoring experience. There was little structure to the blog, giving interns the opportunity to write about whatever aspect of the data collection and field experience they wanted. For some youth, this offered a creative means by which to share their thoughts publicly, though in some cases other dismissed or ignored the responsibility.

One intern, Duncan, showed much enthusiasm for this role. While initially unsure about what to write in his first blog, in his second entry Duncan was excited to share the experience of finding an intriguing caterpillar. After speaking to Dr. Yang about his unusual discovery and learning more about it, he used careful scientific language when describing the caterpillar stages through metamorphosis and encouraged other interns to read the blog entry. Later in the program, Duncan also volunteered to co-write a third blog with a friend, showing the friend how to add pictures and make the post live.

The on-going process of making observations in the field and describing these findings in the blog allowed students to freely share what they were learning and experiencing each week. Blog entries ranged from noting caterpillar discoveries, sharing reflections on teamwork, and describing the challenges of field work on hot days. These examples not only illustrate incremental steps towards science learning and identity development, as in Duncan’s case–but also demonstrate that youth want to share their socio-emotional experiences with outside audiences as well.

Over the course of the program, interns became increasingly confident with the data collection protocol and settled into a familiar monitoring routine. They knew exactly what had to be done and could begin work with little to no instruction. Likewise, the youth became aware of the need to help peers monitor more labor intensive sections – those with bigger plants and/or more caterpillars.

Charged with monitoring several hundred individual milkweed plants, interns learned it was necessary to consistently check that they were keeping accurate track of plants. This included paying attention to numbered tags attached to the plants themselves and the corresponding number recorded on the data sheet. After a particular incident where interns had to go back and re-measure plants a second time after they were recorded incorrectly, they discussed the importance of reliable data and became diligent about paying close attention to plant numbers throughout the rest of the program. During another monitoring event, three of the participants took on the role of teaching the monitoring protocol to two visiting undergraduates. The youth answered questions and demonstrated techniques they had both learned and refined.

A major component of this project included online data entry. Interns worked in pairs or individually to enter the week’s data into an online spreadsheet. This experience offered an opportunity for these youth  to take a second look at their field recordings and sometimes led individuals to comment on or question individual and peer data accuracy and quality. For example, when Dr. Yang shared statistics on the interns’ average monitoring time per plant, it led to a discussion about data quality versus quantity. One youth pointed out her slower monitoring speed was due to thorough measurement – throughout the project this became a particular identity she took on and justified for herself.

Opportunities like these – for discussion to focus around specific situations and include youth voices – gave interns a chance to more deeply understand how data quality could vary. how it affected research, and how their actions played a role in it.

Weaving together new hands-on experiences in science, place, and community

Youth interacted with the natural, built, and social environments where they were monitoring. The site was located along a public trail and passersby occasionally asked what interns were investigating. Some people were familiar with milkweeds and monarchs and shared positive reinforcement and encouragement for what the group was doing. Several youth took the time to share information about the project with interested individuals, while others avoided conversation with strangers or talked about unrelated things instead. Collectively, this wide range of interaction and overall positive response from the public offered interns choice in how they engaged with members of the public and how to share the information about their work.

Many of the interns were unfamiliar with this type of restored urban green space before participating in the project. Through weekly monitoring, familiarity with the place developed and allowed these youth to experience many different aspects of the greenbelt over several months – from picnicking in the shade, to picking in season figs, to witnessing significant phenological changes in the milkweed plants and monarchs – and to understand how restoration, community use, and environmental science research interacted.

The goals of the MMMILC Project are to provide interns with experience contributing to “real world research”  and a first-hand understanding of how  science works.  However, these outcomes are not currently being evaluated by MMMILC or CLBL.