As part of a multi-year internship at a natural history museum, high school interns met weekly during the summer at their local beach to 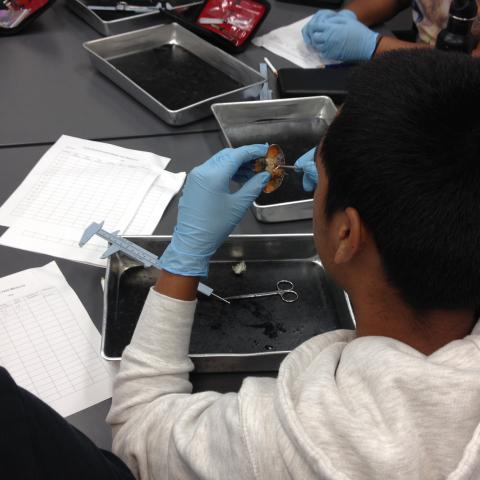 monitor the abundance and distribution of sand crabs, Emerita analoga, and their parasite Profilicollis altmani. As part of a 14+ year partnership with the Long-term Monitoring Program and Experiential Training for Students (LiMPETS), interns from the museum have been monitoring sites along a 3.5 mile span of Northern California coast. Monitoring included taking sand samples along a ten meter transect and recording the number, sizes, and genders of the crabs in each sample. Interns also gathered 30 large crabs and brought them back to the museum to dissect and count the number of parasites in each crab. A sub-set of interns uploaded the crab and parasite data to the LiMPETS online database, and  developed a question to ask of the larger LiMPETS database. Working into the fall, they selected and cleaned data to answer their question, graphed and analyzed their results, and prepared a poster and presentation to share their findings at several local scientific conferences including one large international conference.

Species or system studied: Sand crabs and their parasites

Interns documented the abundance and distribution of sand crabs, Emerita analoga and their parasites, Profilicollis altmani, at beaches in California.

Interns collected data from their local beach and conducted analysis from that beach and additional beaches along the California Coast.

30-35 high school-age youth from communities traditionally underrepresented in science. Youth joined the museum internship in 10th or 11th grade and participated for 2-3 years until they graduated from high school. They participated in many different activities including LiMPETS summer monitoring. A group of 5-7 youth take on more in-depth and longer term involvement.

During the summer, youth interns collected at a public beach and submitted data once a week from computers at the museum. During the fall, the continuing interns met once a week to prepare their poster for the local conferences. In the summer, activities took place on weekdays and in the fall, activities took place after school and on the weekends.

During the summer, 30-35 interns participated once a week for at least four weeks. A group of 5-7 returning interns led monitoring and participated weekly for eight weeks. A subset of this leadership group continued analysis and presentation work in the fall for an additional 15 weeks.

A regional natural history museum housed the internship program and partnered with LiMPETS, which provided protocol, permits, database, and some scientific mentorship, and which uses the data to inform management of marine protected areas. The internship program manager supported the interns during summer monitoring and fall analysis and presentation activities.

As part of a 2-3 year internship, interns had three main areas of work: learning science together with guest speakers and program leaders, teaching science to others through presenting on the museum’s public floor, and conducting scientific research. Interns’ participation in LiMPETS was one of the main activities for conducting scientific research.

A variety of opportunities – including an international scientific conference — build confidence, and develop leadership and communication skills.

Presenting findings to outside audiences was part of the culture of the internship and the summer group knew that a small subset of them would carry forward a question to analyze and present findings at a large international scientific conference. Throughout the summer, the leadership group of interns frequently discussed possible questions to ask of the LiMPETS database for their research, eventually settling on the relationship between sand crabs and the prevalence of its parasite. During the fall, the educators prepared students to field questions from a scientific audience, and created opportunities to practice public speaking, having interns practice “lightning talks”, first about familiar topics and later about their research. In the weeks leading up to the conference, interns also practiced their presentations in front of their peers, other museum educators, and scientists from the museum.

During the fall, three interns worked together to analyze and interpret the data and develop a research poster and presentation that they presented alongside other high school students and hundreds of professional scientists. The presentation lasted for three and a half hours, with a diversity of visitors including professional scientists, conference staff, and other youth. All three interns saw the conference as an important chance to grow by becoming experts and part of scientific communities. For example, one intern reflected on how presenting for him was not only about science, but also about personal development: “I’ve never really presented at conference before, so doing the conference will be like a huge big step for me…the group is more than just creating a research poster…it’s also building character…because like you’re going to have to tell speeches.” The confidence he gained practicing and presenting at the conference carried into other parts of his life at school and home.

Though only three young people presented at that conference, many other interns presented their work to other audiences including passers-by on the beach, peers and program donors at the end of summer showcase, and other youth at a regional youth-focused scientific research conference. For example, every week during the summer, at least one member of the public would stop the interns to inquire about what they were up to, giving the interns a chance to share their work with LiMPETS. These opportunities helped all the interns see their scientific contributions as important not only to natural resource managers but also to community members.

Because the internship extended over multiple years, interns had opportunities to take on increasing leadership roles in data collection and analysis. Two second-year interns were designated as the “summer field coordinators” and were responsible for overseeing 10-15 interns every week during data collection. They printed and distributed protocols and circulated among first-year interns to answer questions during data collection. At the end of the monitoring session, they reviewed all the data collection sheets, returned them if they needed clarification, and submitted the data online to LiMPETS. Alice, one field coordinator, described how she oversaw her peers and would track them down when they did careless things like forget to include the transect number, “which is very crucial”. Alice took seriously her responsibility for the accuracy of the group’s contribution and took on leadership in the role of quality control.

In the fall, interns also participated in selecting and cleaning data for analysis. This allowed them to  engage more deeply in scientific practice, as well as take leadership roles in analysis. For example, the group decided to investigate if sea-surface temperature contributed to the prevalence of parasites in crabs, which required bringing in an additional dataset about sea surface temperature. They had access to two different databases and had deep discussion about the tradeoffs of each – one database had daily measurements from space, while the other measured directly at buoys in the water, but did not have data for every day. The interns had several discussions about the merits of each database and through the process of selecting which to use, they engaged in argumentation, gained insight into the nature of real scientific work, and developed expertise around how to select rigorous data.

As youth develop a connection to the study site, they observe and discuss many interacting social and ecological processes that influence the context of their study organism.

Through LiMPETS monitoring, many invisible components and processes at the beach became visible to interns. For example, interns reported that, before digging for crabs, they didn’t know there was life in the sand, and that, through research for their poster, they realized upwelling was an important process along the California coast. This learning deepened interns’ understanding of the structure and function of sandy beach and coastal ecosystems.

Interns also noticed and came to understand human impacts at the beach. They talked about the pervasive trash on the beach and rubbish from bonfires. In addition to these surface level issues, they also observed human management of the complex beach ecosystem. One day, there was a giant shipwreck on the shore and interns watched large machines deconstruct the ship. Another day, interns observed the local management strategy called “beach nourishment” where bulldozers moved around the sand to prevent erosion and keep the beach flat for human use. They discussed how these activities, and other human involvement such as local pollution, might influence what was happening underneath the sand with the crabs. One intern described how his participation in LiMPETS “helps us understand how we as human interact with the society… ‘cause of toxins, some of that can harm the sand crab population…and therefore that could affect the whole entire food chain”. His experience working with a tiny organism at the beach helped him understand more broadly how humans interact with complex social and ecological systems.

Data: Weekly counts of sand crabs and their parasites

Posters: Posters presented at one international conference as well as several other small regional conferences to communicate work to scientific and local communities.

The museum internship has three main components for interns: learning science, teaching science to others, and conducting scientific research. The program manager reported that participation in LiMPETS helped achieve all three goals. Interns learned science by investigating what a sand crab is, where they live, and how to use scientific tools like calipers to measure the crabs. The older interns who had more experience with monitoring got to teach the first-year interns and all the interns had opportunities to share their work with passers-by on the beach. Finally, interns conducted science through their contribution to data collection for LiMPETS.

The internship also had goals for youth development that were met through participation in LiMPETS. Data collection provided a space for interns to collaborate, develop trust in each other, and bond. In addition, presentation at a national conference helped meet the goal of giving interns access to science careers. As the program manager reported “we want to diversify the STEM workforce at the end of the day and help put youth into this pipeline that aren’t typically there…this group is instrumental in helping those youth to identify as scientists and not question that.” Presenting to outside audiences helped the interns see themselves as scientists who could pursue future STEM careers.