YCCS Tracking Sage Grouse: In the Field and Online 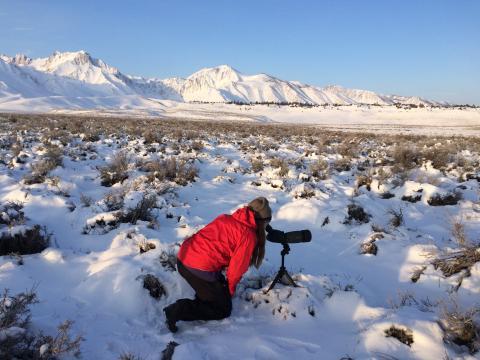 researchers and local working groups who aim to improve sage-grouse habitat. Understanding when the grouse are using courtships display areas (known as leks) is an important step towards refining nuanced conservation efforts. The project allowed students the opportunity to interact with their local environment as well as with scientists working in the area. Partners include wildlife biologists from UC Davis, the Bureau of Land Management (BLM), and the Sierra Nevada Aquatic Research Laboratory (SNARL). Students used the online platform, Zooniverse, to analyze camera trap photos, identifying presence/absence of sage-grouse and classifying behavioral data of the birds.

Greater sage-grouse (Centrocercus urophasianus) are the largest members of the grouse (think chickens) family in North America. Extirpated from much of their historic range, these birds are emblematic of the sage-steppe ecosystem and are considered an umbrella species: meaning that by conserving these birds, over 350 other species that rely on this ecosystem will also be conserved. Greater sage-grouse in the Eastern Sierra are a genetically distinct population: though still the same species, these birds share distinct genetics that separate them from other populations. Students aid in the collection and classification of camera trap data, which will give managers a better idea of how and when birds are using leks throughout the region.

Lek monitoring occurs in the Mono basin near Mammoth Lakes, California. This sensitive habitat sits adjacent to one of the most heavily trafficked areas in the Eastern Sierra, yet often goes unnoticed. Students monitored sage-grouse activity on two leks: one less than 15 minutes from Mammoth Lakes, and the other about 30 miles to the north near Bodie, California. Though both of the leks are part of the sage-steppe ecosystem, they are physically distinct and facilitate very different social environments.

Seven students from a local high school volunteered to participate, outside of class, in the project in Spring 2017.

Structure: In the field and online

Students were introduced to the sage-steppe ecosystem, sage-grouse, lek breeding, and conservation during an introductory meeting with BLM and UC Davis scientists. After visiting the lek and setting up trail cameras, the students were then asked to take on the responsibility of data classification on their own via the online platform, Zooniverse. This year, the students did not return to the cameras. In future iterations of this project, students will be responsible for returning cameras and conducting lek counts.

As an online project, students can still participate at any time in data entry. However, cameras remained active only through the breeding season (mid-March until mid-June).

UC Davis has a long history of working with government agencies to further scientific research. With field sites in Wyoming, the Patricelli lab has collaborated with the BLM in order to collect sage-grouse data spanning projects that include effects of anthropogenic noise on breeding behavior and the relationships between habitat structure and dissemination of social information. This project marks the first time that the Patricelli lab and a California BLM office have collaborated. By sharing data (behavioral data from the Patricelli lab and survey/land data from the BLM), both entities will benefit in an effort to improve sage-grouse conservation.

Students attended two different science discussions during the course of the project. In March, a graduate student talked to the students about the sage-steppe system, current conservation research, lek mating and sage-grouse biology. In June, the lead scientist traveled to SNARL and talked to students about sexual selection, animal behavior, how she became a scientist, and discussed past projects in the Patricelli lab. Peppa, a robotic female sage-grouse and loyal lab member, also attended the lesson. Dr. Patricelli showed students how Peppa is used to manipulate the social landscape and “conversation” between male and female sage grouse on the lek.

Presentations with information about sage-grouse, animal behavior, and conservation were all created to engage students in the application of findings. The project relied heavily on technological resources. In order to train students in reliable and robust data collection, a Zooniverse training protocol was established. The project is in review for public access and the training protocol will be incorporated into the online platform.

While students did not present findings in this first year, interactions with scientists and managers helped build toward that goal for future years.

Findings from this project will be shared with local working groups whose mission it is to uphold current conservation goals for the BiState population of Greater sage-grouse and identify potential conservation concerns. The students interacted with wildlife biologists from the Bureau of Land Management who play an active role in the conservation of sage-grouse. Biologists explained to the students how results from this study will be incorporated into management plans, including Population Management Units (PMUs) that have been developed throughout the bird’s range. As the project evolves and leaders including BLM employees look to make plans for the next season, there will be opportunities for students to share findings with a variety of stakeholders.

Future iterations of this project will see more interactions between students and individuals from the local working group, which include members that represent government agencies (i.e. NDOW, BLM, USGS) and volunteers from local NGOs. Findings will be analyzed and presented by students at stakeholder meetings.

Allowing students a high degree of freedom in data collection, without sustained engagement with project scientists, may have discouraged youth from trusting themselves to collect reliable data.

Data collection was done remotely: students were asked to log in to Zooniverse on their own time to classify photos from the lek. Though students appeared to be engaged and excited about the project while they interacted with UCD and BLM scientists, this engagement seemed to wane when students were no longer in direct contact with scientists. As a result, there was a steep drop off in online classification of photos. Despite this drop off, one student actually classified an impressive amount of photos and even emailed the lead UCD scientist in order to clarify how date and temperature data would be collected. This student went out of her way to ensure high quality data. She was an exception in this case but that is likely due to the fact that students may have overall felt undirected without continuous engagement with project scientists.

Using a field of science usually not taught in high school to explore unknown problems gives students an insight into how they can engage with and improve the world around them.

Animal behavior is often fraught with esoteric ideas. Why do animals do the things that they do? How does their behavior change in response to the nonconsumptive effects of human impact? Students may see the field of animal behavior as a science that has no bearing on the “real world” and conservation issues. But understanding animal behavior is critical to conservation. If we can predict how animals react to human impacts, we can produce more applicable conservation plans and goals. This project introduced students to how animal behavior can both answer and generate conservation questions. Students classified photos of birds on leks to get an idea of when birds are using this critical breeding area and what they are doing while they are there. This form of exploratory science that is not hypothesis driven is essential to conservation science. Students remarked that it was interesting to do science outside the sometimes cut-and-dried structure of high school curricula and many appeared to walk away with ideas about how humans may be impacting local ecological communities through behaviorally mediated effects.

Mammoth Lakes is is nestled at the base of the Eastern Sierras and most of the economy is driven by skiers, hikers, and thrillseekers who visit from other parts of the state. The students in this region had astute observations about how humans have an impact on their surrounding ecological communities. “A lot of people from Los Angeles come up here and just run around the sage and don’t treat it like they live here,” one student noticed. Most of the students recognized the ‘usual suspects’ that play a role in conservation efforts: people litter a lot, people drive a lot of cars, people come in and trample the sage brush. However, not many of the students had thought about conservation as it relates to animal behavior.

Students participated in the setting of camera traps and thus helped to produce the photos. They also produced photo classifications.

Why: Surveying sage-grouse leks around the clock enables scientists to collect data on lek use that would otherwise not be available, either because it is unreasonable to remain on the lek all day and night or because a scientist on the lek would affect bird behavior.

Impact: This project has gained interest from local working groups as well as other scientists in the area and will be continued in the next field season. Other sage-grouse researchers have expressed interest in adopting a similar project in order to engage their local community as well as answer habitat use questions.

For the first pilot season students did not present findings, but the project did appear to foster an environment in which some students were able to approach data as scientists. One student in particular was able to notice patterns in sage-grouse activity and formulate hypotheses as to why male grouse may be using the lek during “weird hours like 2AM”.

The quick decline in participation after the initial phase of the project may have stemmed from lack of engagement with project scientists. Post interviews revealed that some students were unsure of their ability to classify photos correctly and thus stopped classifying photos. Had a project scientist been more readily available in person, it is likely that students may have felt more comfortable asking questions about their performance as data collectors. Future versions of this project will hopefully include more interactions with project scientists and more activity online. Zooniverse provides online “chat rooms” for participants who may be confused about the data collection process.