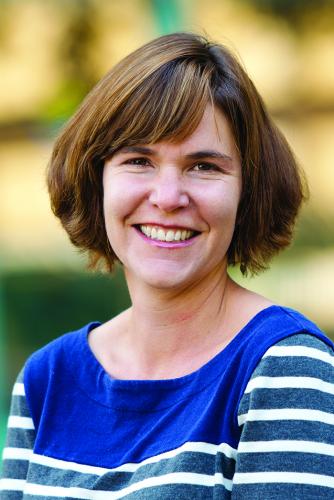 Kelsey Krausen, PhD (’16), decided to earn her doctorate in Education with an emphasis in policy because she wanted to give educators a legislative voice. She took a big step toward that goal even before passing her qualifying exams, when she was hired by then California Attorney General Kamala Harris to join a research team that was reporting on elementary school truancy. This year she led the team as a Senior Education Research Fellow as they issued their fourth annual update.

The report, “In School and On Track: The Attorney General’s 2016 Report on California’s Elementary School Truancy and Absenteeism Crisis,” focuses on elementary school students since these children’s school absences are caused by factors outside their own control. “The range of challenges their parents face are huge,” Krausen said. “They include problems with logistics to severe mental health issues, homelessness, addiction and extreme poverty. Some issues are very hard for parents to overcome, and it’s going to take more than a school or a district to address them.”

One of the main goals of the report is to raise awareness of the importance of school attendance and how much absences— including suspensions—can affect a child’s education. “A lot of the children who face the greatest challenges are missing school due to suspensions, as well as absences,” Krausen said. “Some student groups are disproportionately impacted by chronic absenteeism and suspensions, particularly African-American students. It’s very sad when you see the numbers—we’re talking about little children, including kindergartners, who are being suspended.”

Over the four years that she’s worked on the report, Krausen has seen changes in the education eld. “It’s really striking,” she said. “The data show that schools have started paying much more attention to chronic absences. The State Board of Education has made chronic absences a part of their accountability system, and the federal government is now having states track chronic absences and disproportionality in student discipline.”

Krausen balances her work for the Attorney General’s office with a 25 percent postdoc position in the School of Education as well as serving as a Lecturer in the CANDEL program, where she teaches a class to help EdD students prepare for their qualifying exams and dissertations. Her own dissertation explored how district leaders and the school board in Oakland make and communicate their decisions about school closures, and the factors that impact those decisions, such as reduced school enrollment due to changing demographics and the proliferation of charter schools drawing enrollment out of traditional public schools.

“I’m really excited about my research and the projects I’m working on,” Krausen said. “I can see the impact of my work and how it relates to what district and county leaders and educators are doing right now, and that’s important to me.”