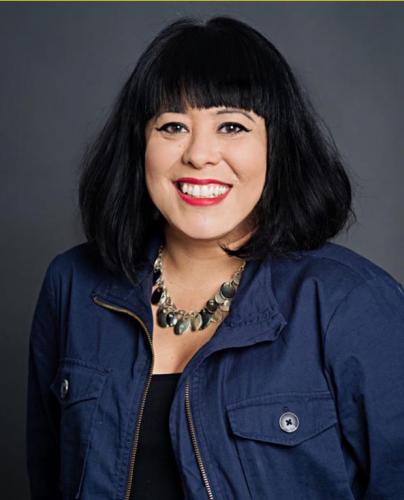 Newbery-winning author Professor Erin Entrada Kelly identifies as Filipina-American and was raised in Louisiana, where she began writing when she was just a little girl. Then and now, when she was not writing she was reading, and vice versa. Currently Kelly writes full-time in a co-working space, where she works in longhand. Each idea that she considers ready to write down gets its own fresh notebook, where character and chapter outlines are accompanied by elaborate sketches of trees. Her stories come to her first through a character, often already named and with established personalities. For instance, Analyn “Apple” Yengko, aspiring rock star and the only Filipino girl at her middle school. Or Sol and Ming, young sisters who build a fantasy world to escape the realities of their own.

A professor of children’s literature in the graduate fiction and publishing programs at Rosemont College near Philadelphia, Kelly won the Newbery Medal in 2018 for her third novel, Hello, Universe. Among other awards, her debut novel, Blackbird Fly, won SCBWI’s Golden Kite Honor Award in 2016. Professor Kelly is also a short story writer. Her short fiction has been nominated for the Philippines Free Press Literary Award for Short Fiction and the Pushcart Prize.

Kelly calls herself mestiza, which means “of mixed blood.” Her mother is Visayan and lives in Cebu, an island located in central part of the Philippines. Because she grew up hearing Cebuano, many of her Filipino characters speak this rather than Tagalog. Bits of her experiences are found in her books, especially in Blackbird Fly. Professor Kelly’s books sensitively portray experiences of bullying, isolation, abuse, friendship and hope. She believes that if she were to attend Hogwarts she would proudly be sorted into Hufflepuff.

Watch a video of Kelly’s 2019 presentation at the Mondavi Center here.