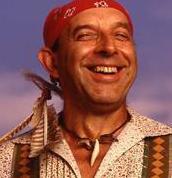 Living and working in his family home at the foot of the Adirondack Mountains, acclaimed author Joseph Bruchac (b. 1942) has devoted forty years to celebrating his Abenaki heritage through prose, verse, story, and song. As the author of more than 120 books, a professional musician, and a skilled teller of traditional tales, Bruchac has worked to share traditional and contemporary Native American culture through many genres and for audiences of all ages. His canon of works is united by a handful of simple themes: “that we have to listen to each other and to the earth, that we have to respect each other and the earth, that we never know anyone until we know what they have in their heart.”

On writing, Joseph Bruchac says, “My advice for anyone wanting to write is the same advice I give myself: You have to do it a page at a time, and you have to keep on doing it. You take one step to climb a mountain.” The spoils of this advice are extraordinary. Young readers will delight in exploring award-winning picture books such as The Boy Who Lived with the Bears: And Other Iroquois Stories (winner of the 1996 Boston Globe/ Horn Book Honor Award) and The Story of the Milky Way (winner of the 1995 Scientific American Children’s Book Award), while older readers can revel in the chilling Skeleton Man (an ALSC 2002 Notable Children’s Book) or The Winter People, a work of historical fiction called “heartbreaking but exciting” by School Library Journal. The depth and breadth of Bruchac’s canon establish him as an author of works that, in the words of American Indians in Children’s Literature (AICL), “accurately portray Native people. Books that don’t stereotype or romanticize who we are, and who we were…  They’re important! Not just to Native readers, but non-Native ones, too!”

Since his first collection of Iroquois folk stories was published in 1975, Mr. Bruchac has been the recipient of numerous awards, honors, and starred reviews. These include (but are not limited to) a Rockefeller Humanities fellowship from the Smithsonian Institution Center for Folklife and Cultural Heritage, a National Endowment for the Arts Writing Fellowship for Poetry, the Knickerbocker Award for excellence in non-traditional forms of poetry, the Hope S. Dean Memorial Award for Notable Achievement in Children’s Literature from Boston’s Foundation for Children’s Books, the Virginia Hamilton Literary Award from Kent State University’s Virginia Hamilton Conference, the Cherokee Nation Prose Award, the 1998 Writer of the Year Award, and the 1998 Storyteller of the Year Award from the Wordcraft Circle of Native Writers and Storytellers. In 1999 he earned a Lifetime Achievement Award from the Native Writers Circle of the Americas.