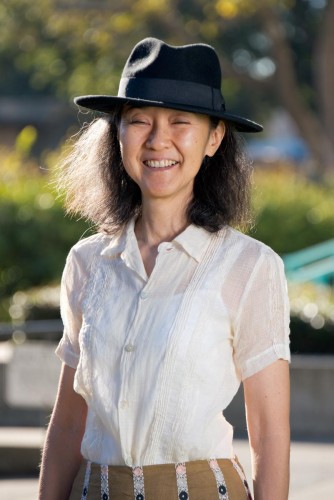 Sheila Hamanaka has been illustrating children’s books since 1987. She is best known for her books on peace and multiculturalism. Her award-winning book “The Journey” is based on a five-panel mural she painted about the history of the Japanese in America, focusing on the concentration camps in which her parents were jailed during World War II. Her popular “All the Colors of the Earth” celebrates the diversity of children and parents. Hamanaka’s work with the Animal Welfare Institute reflects her deep concern for all sentient beings and for our home, earth. She is currently writing a series of middle grade novels with co-author Pat Cummings.

“The Boy Who Loved All Living Things” (Animal Welfare Institute, 2011) Albert Schweitzer biography & what he learned from animals and his work with sick people; written as an imaginary childhood journal

“Pablo Puppy’s Search for the Perfect Person” (Animal Welfare Institute, 2008) two dogs (one young & the other old) living in a shelter educate children about the humane treatment of animals

“Grandparents Song” (HarperCollins 2003) celebrates the ancestry and diversity in our country; written in rhyme

“I Look Like a Girl” (Morrow Junior Books, 1999) imaginative story about a girl who assumes different shapes and forms, like a dolphin, condor, wolf

“Peace Crane” (Morrow Junior Books 1995) A child in Africa hopes that the spirit of Sadako will influence the violent world in her life; written in verse

“On The Wings of Peace” (Clarion Books 1995). In commemoration of the 50th anniversary of the bombings of Hiroshima and Nagasaki, Hamanaka compiled the work of 60 children’s book authors and illustrators from around the world. The royalties were donated to three peace organizations chosen by the contributors.

Awards for “The Journey”