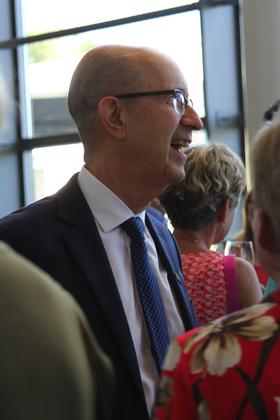 Founding School of Education Dean Harold Levine retired on June 30, 2016. He came to UC Davis from UCLA in 2001, and since then has been a tireless advocate for the School’s vision to eliminate educational inequities and advance a quality education for all.

At a celebration of Dean Levine’s achievements shortly before his retirement, Acting Chancellor Ralph Hexter observed that “Harold deserves our admiration and thanks for many reasons, but one of them is this: at a time when the field of education has faced truly formidable challenges—and not a few of them hostile and deceptive—he has loyally fought the good fight. He has remained firm in his belief in the profession’s great value and noble goals, and he has worked hard to support and advance it. The next dean will have a superb foundation on which to build further, and in doing so will be standing squarely on Harold’s shoulders.”

From the beginning, Levine was committed to building a School of Education that would make a difference for educators, policymakers, students and everyone else who has a stake in California’s schools. His commitment to innovative approaches to real-world problems, rather than an “ivory tower” approach, never wavered. In the last issue of the School of Education magazine published during his tenure, he wrote of his pride in the School’s newest center. “I’m not an ivory tower kind of dean,” he said. “I believe schools of education should tackle the real-world problems that rob learners of their potential. In that spirit, I can’t imagine anything further from an ivory tower approach than the work being done at the Reading and Academic Development Center, which is meeting community demand for research and services for children with reading issues.”

During his retirement remarks, Levine encouraged the School’s faculty and staff to keep this vision at the forefront of their approach. “If we’re not being innovative,” he said, “if we’re not looking for new solutions, if we’re not trying to come up with ways to approach problems in public education, and if we’re not doing it in a way that has impact…then we’re not doing our job.”