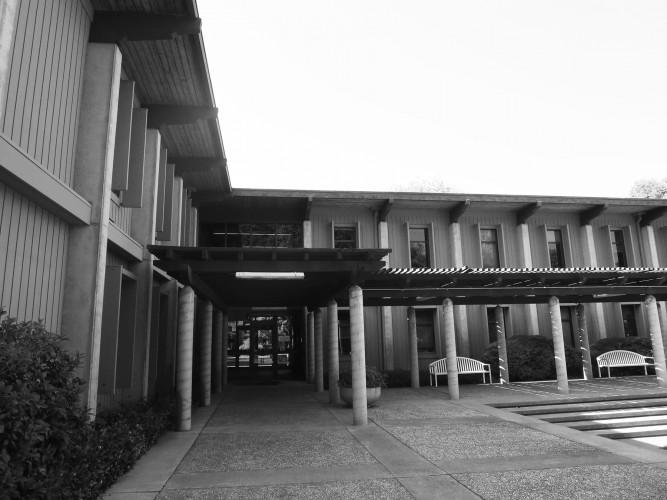 Beginning in 1922, a teacher education program at Davis in the fields of agricultural education and home economics was administered jointly by the Berkeley campus and the University Farm. In 1932 Davis began offering the Special Secondary Credential in Vocational Education. When World War II brought a serious shortage of vocational agricultural teachers, the university began early placement of credential candidates in full-time school positions. This practice eventually developed into internship programs that became useful tools in teacher education after the war. Offered through the Department of Agricultural Education, the Special Credential in Vocational Education program enabled candidates with a few additional courses to qualify for a General Secondary Credential, usually in science. The first General Secondary Credential was granted in 1951. From then until the end of the decade, the department gradually extended the content areas for earning the secondary credential.

In 1959 a new Department of Education was formed in the College of Letters and Science, with founding members from Agricultural Education Margaret Sutherland, Larry Newberry, and Doug Minnis. Minnis started the General Elementary Teacher Education program, and both elementary and secondary teacher training was based on internship programs. This approach to teacher training continued for the succeeding 10 years.

Many changes took place in the department in 1964. In addition to new faculty hires, the number of teacher candidates neared 200. The state legislature passed bills making teacher preparation a postbaccalaureate program. By 1967 the campus approved the M.A. in Education with two areas of emphasis: history and philosophy of education, and educational psychology. By 1974 the department added advanced credentials in school psychology, reading, and bilingual education. During the 1970s the department graduated its highest annual numbers of credential students: 233 in 1974, and nearly 300 in 1977.

The demand for teachers declined during the 1980s, but the academic reputation of the department grew. Donald Arnstine’s scholarship on the work of John Dewey, and Linea Ehri and Carl Spring’s work on beginning reading, won awards from the American Educational Research Association. Richard Figueroa and Jonathan Sandoval’s research in school psychology earned national recognition.

During the early 1980s the campus began a long process of academic planning. After lengthy discussions, the Walker Committee in 1983 recommended the formation of an intercollege Division of Education with a graduate group, the consolidation of all credential programs on campus, and an Organized Research Unit to facilitate school-based research. In 1988, after years of deliberation, both the Division of Education and the Center for Cooperative Research and Extension Services for Schools (CRESS) were established. The center is responsible for bringing university research to schools and identifying school problems appropriate for university research. Subject matter projects in mathematics, writing, and science have expanded to include projects in history and arts education.

School of Education Established in 2002 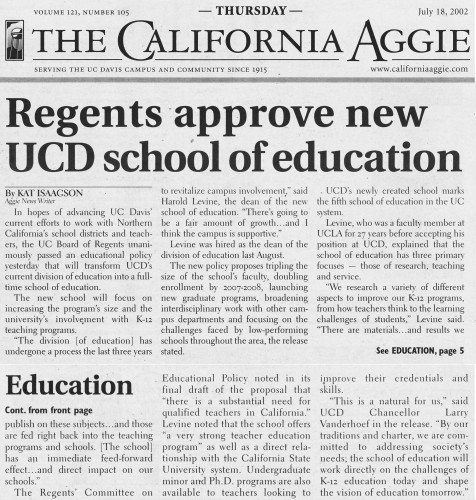 In 2002, the University of California Board of Regents approved the establishment of the UC Davis School of Education, establishing a new school to replace the campus’s Department of Education.

The California Aggie reported on the new school on July 18, 2002:

In hopes of advancing UC Davis’ current efforts to work with Northern California’s school districts and teachers, the UC Board of Regents unanimously passed an educational policy yesterday that will transform UCD’s current division of education into a full-time school of education.

The new school will focus on increasing the program’s size and the university’s involvement with K-12 teaching programs.

“The division [of education] has undergone a process the last three years to revitalize campus involvement,” said Harold Levine, the dean of the new school of education. “There’s going to be a fair amount of growth … and I think the campus is supportive.”

Levine was hired as the dean of the division of education last August.

The new policy proposes tripling the size of the school’s faculty, doubling enrollment by 2007-2008, launching new graduate programs, broadening interdisciplinary work with other campus departments and focusing on the challenges faced by low-performing schools throughout the area, the release stated.

Levine, who was a faculty member at UCLA for 27 years before accepting his position at UCD, explained that the school of education has three primary focuses—those of research, teaching and service.

“We research a variety of different aspects to improve our K-12 programs, from how teachers think to the learning challenges of students,” Levine said. “There are materials … and results we publish on these subjects … and those are fed right back into the teaching programs and schools. [The school] has an immediate feed-forward effect … and direct impact on our schools.”

The Regents’ Committee on Educational Policy noted in its final draft of the proposal that “there is a substantial need for qualified teachers in California.” Levine noted that the school offers “a very strong teacher education program” as well as a direct relationship with the California State University system. Undergraduate minor and Ph.D. programs are also available to teachers looking to improve their credentials and skills.

“This is a natural for us,” said UCD Chancellor Larry Vanderhoef in the release. “By our traditions and charter, we are committed to addressing society’s needs; the school of education will work directly on the challenges of K-12 education today and shape the vision of education tomorrow.”

This history is excerpted from the University of California History Digital Archives and the California Aggie.