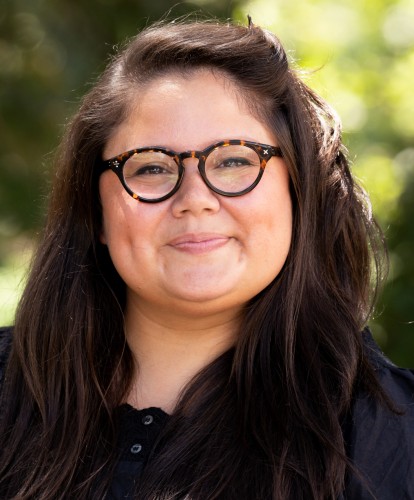 Dr. Yianella Blanco joined the faculty of the School of Education as an assistant professor in July 2022 in the language, literacy and culture emphasis area. Blanco earned her bachelor’s degree in History at University of Massachusetts–Amherst and her two master’s degrees at Long Island University–Brooklyn and Teachers College, Columbia University, before returning to Columbia for her PhD in social studies education.

Blanco taught special education and humanities at two New York City high schools before entering her doctoral program. “I became a teacher because I wanted more Latinx representation, more non white-European forms of knowledge and content in school curriculum,” she said. “As a student, I never saw anything in textbooks that resembled my experience or my family.” When Blanco found that her options were limited even as a teacher, she decided to enter a doctoral program to explore questions about how curricula is created and what her role could be.

As she went through her doctoral program, Blanco realized that social sciences research almost never includes Central Americans, even though they represent one of the largest Latinx communities in the U.S. “I learned a lot about myself as a Central American and a Costa Rican—about my history, my family’s history, the history of my students whose families were Central American, and what brought us all to the U.S. At the same time, there was a lot of news coverage about Central American migrants experiencing human rights abuses at the border. It was all related in some way or another with American imperialism in the region.”

Blanco began to focus on teaching and learning about American empire and its impact, writing about how the U.S. intervention in Central America caused displacement and eventual migration of people north to the U.S., where they then faced enormous obstacles to building new lives. “In social studies, America is framed as a pillar of freedom and justice, a country made of immigrants,” she said, “but if you look beneath that and see why people become immigrants and how they’re treated, it tells a much different story. And it’s not a uniquely Central American issue. You see it throughout the world, in places like Vietnam and the Middle East. So I study America as an empire, much like other researchers look at European empires, and the effects and influences on migration patterns, with Central America as a case study within that larger umbrella. As a social studies education researcher, I then think about how to teach and learn these histories.”

Blanco describes two distinct strands to her work. “The first is creating spaces in which our immigrant youth, Central American youth and Latinx youth feel validated and loved and seen,” she said, “because I think all children deserve that. But the other piece is who I am as a researcher, and that’s my research methods, where I use a lot of community-based and action research.”

Participatory action research means that Blanco approaches the students and teachers she works with as her co-authors and co-creators. “For a long time, research in general has been a very extractive process,” she said. “Researchers go into classrooms, extract what they need and write up the findings, versus asking questions about what the teacher and young people are grappling with, and seeing them as knowledgeable—possibly even more knowledgeable on these points than the researcher. So I attempt to break down barriers to whatever extent I can. I draw on alternative forms of research to make it a more reciprocal process, through transparency, meeting with them, giving them editing access to revise questions and make changes, and reading drafts of my work. By learning from different perspectives, we can complicate the story, and have a more rigorous process.”

Blanco believes that this moment in history is an important one for the field of social studies. “It brings up questions about what we remember about the past, how we remember it, who decides, what we do with that memory—all these questions are coming up in this moment, as well as discussions about civics, and what it means to be a citizen since the January 6th attack on the U.S. Capitol. Right now feels like a really important time, especially after a period of disinvestment in social studies education.”

As someone whose work is inspired by and draws from ethnic studies, Blanco said it feels like a particularly exciting time to be in California in general, and Davis in particular. “It’s an honor to work alongside scholars who are building a future in which ethnic studies is celebrated and championed in our schools,” she said. “Given the faculty, students and community at Davis, I feel like I have so much to learn from them and I’m excited to continue to build with them.”