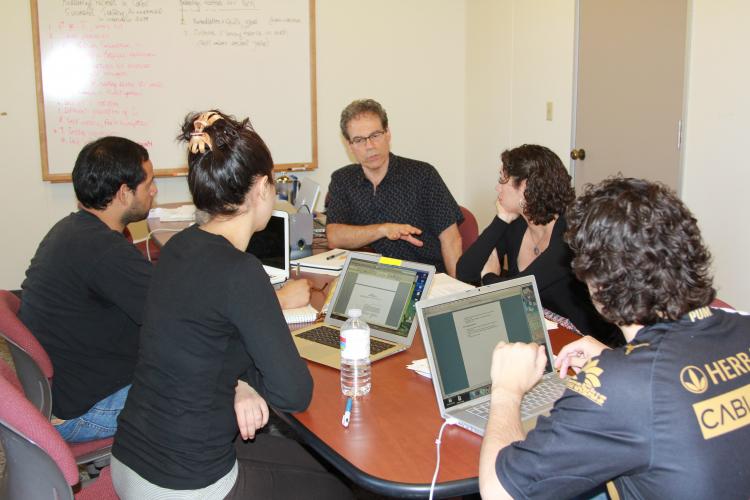 Steven Athanases, professor of education, was so impressed with four undergraduate students in his Education minor course—Cultural Diversity and Education in a Sociopolitical Context—that he asked them to be on his research team during the 2012 Spring Quarter.  Naficeh Dastgheyb, Mercedes De La Riva, Victor Lagunes and Reynaldo Rodriguez agreed.

Athanases is the lead researcher at UC Davis for “Schools Organized for Latina/o Educational Success” (SOLES), a three-year research project funded by the W.T. Grant Foundation. The project is a study of three urban high schools in California that have shown successful academic outcomes for Latino high school students. The goal is to identify and explore school social structures and resources that promote instruction that engages Latino students in academically challenging work. The study also investigates the cultural resources of teachers and the organizational structures that support the teachers.

As part of the UC Davis project, videos were taken of English and math teachers while they taught in their classrooms in a Northern California high school. Athanases’ student research team reviewed the videos and additional observation data culled from six lessons during an academic year. They analyzed how each teacher introduced and frequently used cultural and linguistic resources, broke down processes explicitly for activities or assignments, and had students collaborate on activities together.

The research experience made an impact on the students in a variety of ways. “This was a reminder to me that it’s easy to blame teachers for lack of student success,” said Rodriguez, a Latino who would like to be a future teacher. “But it’s not so easy with all the demands on a teacher. How much more effective could teachers be if school administrative issues disappeared?”

“The knowledge I learned in Education 150 all plays a role when I apply it to a real classroom,” said Dastgheyb. An IranianAmerican, she is studying human physiology and believes education concepts apply everywhere. “At first I was critical, but I changed my way of thinking to reflect instead.”

“Learning how to research and organize ideas helps me think about what I want to do in my future,” said Lagunes, a Latino who would like to incorporate social justice in his classroom when he becomes a teacher. (Lagunes received his teaching credential from the School of Education in 2013, and his MA in 2014.)

“There are all these layers, and the layers change,” De La Riva noted. She is a Latina studying community development and is interested in connecting schools with their communities. “These research numbers that exist—what do they really mean? You can’t get perspective using only one discipline, such as psychology or sociology. There are more things at work. This is so valuable when thinking about marginal groups and the achievement gap.”

“I am so pleased with this team,” said Athanases, who found the students’ work and observations invaluable for the project. “I hope to do more of this kind of research mentoring in the future.”

Steven Athanases is a Professor in the School of Education at UC Davis.