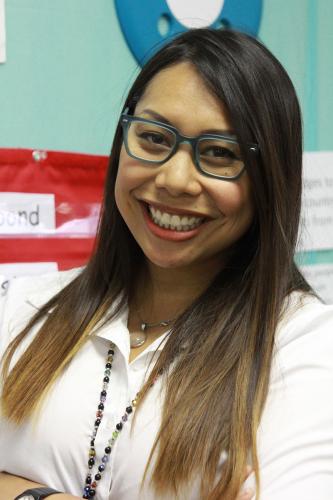 Gifts to the School’s Annual Fund help students like Destiny realize their dreams to teach. Make a gift today.

For the young Destiny Ramos (BA 2014), school was not always a source of joy. Growing up in Fairfield, Calif., Ramos received little encouragement from teachers and struggled academically. Then she entered fourth grade, and everything changed.

“My fourth grade teacher made me feel like I was not a problem,” she said. “When I became successful as a student, I knew I wanted to be a teacher.”

Thanks to an Annual Fund scholarship, Ramos is now able to, well, fulfill her destiny. Because her path to teaching was not straight, she is grateful for the financial and moral support that gifts to the Annual Fund provide to aspiring educators like her.

Her grandfather told her that as a teacher, she would be “poor,” so after some college, she began working at the Solano County courthouse, eventually becoming supervisor of the collections department. “It was not for me,” she said.

When she became a CASA (court-appointed special advocate) for abused and neglected children, she knew she had to get back to college. “I remember helping one girl who was failing science pass her class,” said Ramos. “I quit my job and enrolled at UC Davis, with the intention of eventually earning my credential from the School of Education.”

At the age of 29, Ramos found entering and affording college a challenge. As an undergraduate, she worked two jobs while holding down a full load of courses. “Going back to school was scary. I had no idea how I was going to pay for it, so I had to work,” she said.

But after a full day of student teaching and education classes well into the evening, earning a credential is more than a full-time job. “The Annual Fund scholarship allows me to give my all to the classroom and my students and to absorb all that I can learn. This support is a tremendous advantage and a blessing,” said Ramos.

Comparing her experience in the classroom, her preparation for teaching, and the support she receives from the Annual Fund to a “huge circle” of community building, Ramos has taken her own education full circle.

“I spoke to my fourth grade teacher when I got accepted into the credential program and thanked him for all that he did for me,” said Ramos.