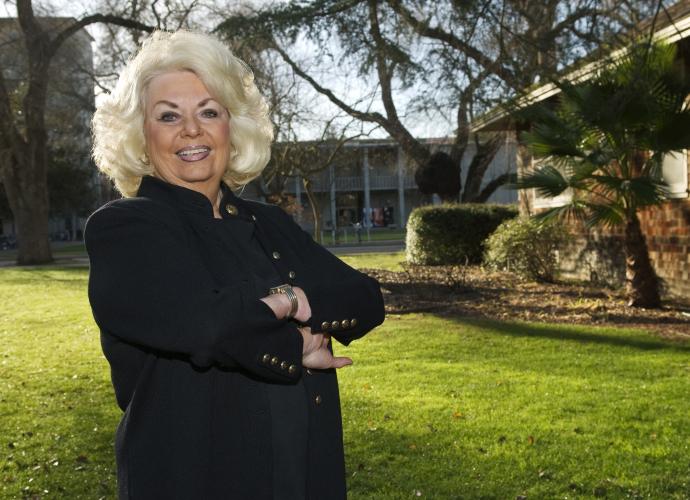 “Teachers don’t understand the power they have. They need to know.”

March 2010 – Challenging the school system was not what she intended. Mary Catherine Swanson created the AVID (Advancement Via Individual Determination) program in 1980 because she thought it was right for her students.

Never in her wildest dreams did Swanson envision AVID today impacting more than 400,000 low-income and under-served students in nearly 4,500 schools in 45 states and 16 countries. And counting.

In recognition of her prominent career as an educator and innovator, the UC Davis Cal Aggie Alumni Association has honored Swanson with the 2010 Distinguished Achievement Award.

“What a complete surprise,” said Swanson. “It really means something to receive this honor from my peers who know my work intimately. It’s the best recognition I could possibly have.”

Discovering UC Davis … And Her Calling

Born and raised in the small town of Kingsburg, California, Swanson went to college in the Bay Area to make it big in journalism. Her father, a newspaper publisher, advised her to think about teaching English instead. “I wanted to write hard news,” Swanson recalled, “but I realized I had to be realistic as a woman in the 1960s. As a summer intern at the San Francisco Chronicle, the most I ever got to do was obituary research.”

Keeping her options open, Swanson pursued a double major in English and journalism, taking classes at both UC Berkeley and San Francisco State University. Her high school sweetheart, Tom Swanson (BS ’67, MS ’69), would visit her often from his UC Davis campus and marvel at how different their college environments were.

“Berkeley and San Francisco were hotbeds in the ‘60s,” Swanson said. “Students were on drugs and passing out in class. Riot police were on campus with rifles. Professors and students were often jailed for protests. It was not the best education. It was survival.”

“I took Tom to my senior prom, which was formal dress at the San Francisco Fairmont Hotel. Then he took me to his senior prom at the Davis gym—a barn—where at one point everyone joined hands in a circle and did the Bossy Cow-Cow cheer!”

Swanson was drawn to the Davis campus. With her father’s encouragement, a clear path took shape when she graduated. Even though she had a prestigious national fellowship lined up for Columbia University graduate studies in New York, Swanson instead married and enrolled in the UC Davis teaching credential intern program in the summer of 1966. She taught full-time at nearby Woodland High School while taking her credential classes.

Swanson said the teaching credential program “wasn’t theoretical, it was very practical application” as her Davis supervisors coached her in real teaching situations at the high school and engaged in “really rich ways to run things” with her intern program cohort. Swanson enjoyed the access and connection with her Woodland mentors as well, often going early to school to query a classroom teacher whom she admired.

During that first year of teaching, Swanson knew she had found her calling. “I told my husband that I loved teaching so much, I would do it paid or not,” she said. “Tom was in grad school and very supportive, but he asked me to please remember to pick up my paycheck!”

After one year at Woodland High School, Swanson taught English and journalism at Armijo High School in Fairfield and at Moreno Valley High School in Sunnymead. She landed at San Diego’s Clairemont High School in 1970 and taught there for 17 years, eventually rising to chair the English department.

It was during her years at Clairemont that Swanson’s idea for AVID was born. In 1980 the school, which had previously served a student body that was 98 percent white, prepared for an influx of 500 minority students who were ordered bused to Clairemont by the courts. Clairemont quickly moved to create “special” or remedial classes for the new students, the bulk of whom were two or more years behind grade level.

The idea of “dumbing down” classes for disadvantaged students troubled Swanson, who was convinced there had to be a better alternative. She and her mentor, Jim Grove, who taught seminar classes for the highly gifted, began to look for a way to make integration work for their students without sacrificing excellence.

Swanson proposed that she be allowed to undertake an experiment to see if 32 of the incoming freshmen could cope with Clairemont’s college preparatory curriculum if she supplemented their education with a special period each day devoted to giving them the academic tools and motivational support they would need to succeed. Swanson would focus on the importance of note-taking, writing as a learning tool, and open discussions between students and teachers about how students learn best. If a student were having particular difficulty with a subject, Swanson would see to it that he or she received special tutoring from other students, teachers and college tutors.

Mulling over a name for the innovative new program, Swanson and Grove brainstormed together. Grove suggested the word “avid”—derived from the Latin avidus, meaning “eager for knowledge”—might make a good label since it described the type of student for whom they were tailoring the program: an average, “in the middle” student from an under-served background who was nevertheless avid to learn.

Swanson like the idea but wondered what the acronym might stand for. Grove responded that AVID could stand for Achievement Via Individual Determination. Swanson suggested they substitute “advancement” for “achievement” since she was proposing to “advance” students both academically and socially.

Thus, AVID was born. To the astonishment of everyone but Swanson, the AVID experiment was a smashing success. At the end of four years, 30 of the 32 students went on to college, 28 to four-year institutions and two to local community colleges. All 30 were the first in their families to attend college.

It wasn’t long before AVID reached beyond San Diego County. In 1992, Swanson founded the nonprofit AVID Center to disseminate the thriving program more widely. Today the AVID program operates in 16 countries, including throughout the United States, on U.S. military bases, and in Canada and Australia. AVID has also expanded to include the fourth through twelfth grades.

Swanson retired as the executive director of AVID in 2006 with several honors to her credit. CNN and Time Magazine named her America’s Best Teacher in 2001, and she was featured on an accompanying 60 Minutes II segment. Swanson was one of three 2001 recipients of the Harold W. McGraw, Jr. Prize in Education, and she is the only public school teacher ever to have won the Pioneering Achievement in Education Award from the Charles A. Dana Foundation. Pulitzer Prize winning author Jonathan Freedman profiled her work in his book, Wall of Fame, which chronicles AVID’s early challenges and its rise to being a national force in education. Washington Post columnist Jay Mathews summarized her impact by writing, “I don’t know any single person in the country who has done more for our school children than AVID founder Mary Catherine Swanson.”

Swanson remains active in retirement as a member of the AVID Board of Directors. She also sits on the UC Davis School of Education Board of Advisors and three other nonprofit boards. Swanson continues to bring her energy and vision—backed by strong data—to challenge the education system.

Swanson says although the challenges in education are huge, she still loves to find ways to influence and change. “As long as I’m focused on helping kids, it’s fun,” she said. “They respond and work very hard. Teaching is the most amazing career I could have imagined.”