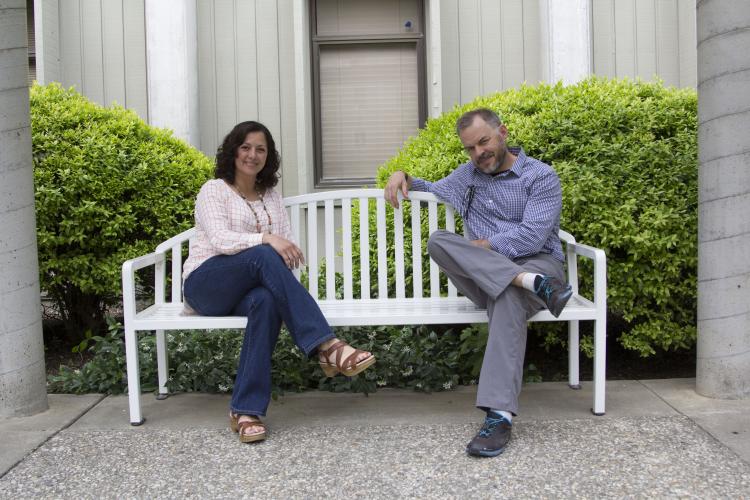 We asked Slilma Tukey (Cred. ’17) and Steve Platt (Cred. ’17), both Air Force veterans beginning their teaching careers later in life, to talk to us about why they joined the military, why they’re making the change to teaching, and how their experiences in the military affect their teaching practices.

Why did you choose an Air Force career?

SLILMA: It was something I always wanted to do. I’m from Nicaragua and I remember when the U.S. Marines came when I was a child and all the good they did. I was very grateful even at a young age, and I wanted to do something to repay that.

STEVE: I would love to tell you I wanted to serve my nation when I joined the Air Force at 18 years old, but I was just an 18-year-old boy who wanted to fly jets. Over time I came to understand the gravity of what I was doing and to grow a much greater appreciation for serving my country. So I’d say thankfully my reasons matured to a much more community- and service-oriented rationale.

What were your roles in the Air Force?

STEVE: I retired from the Air Force after 25 years. I flew F-16s, which was what I always wanted to fly. And I went to war, which is what I thought I wanted to do for my country. But after going through wartime for many years, I understood the seriousness of what I was doing, and the broad-based implication of a foreign policy that rests on our projection of power. I began to understand how my role was very much a part of where our nation was going, and days like September 11 were very significant to me based on what I was doing at the time.

SLILMA: I was in the Air Force Security Forces for six years. Security Forces includes military police, heavy weapons, law enforcement, airbase defense, and canine units. We’re responsible for the security of military personnel and civilians inside bases, military assets, and the perimeter of the base. We’re overseas and also in the air with the heavy jets like C-5s and C-130s. Security Forces is responsible for the security of those areas. I did a little bit everything, both in-country and overseas, in training scenarios and war scenarios, from a bird’s-eye view to a boots-on-the-ground view. You get to really appreciate your purpose in life and your job, and you get to see how you’re really just one nut and bolt of this great machine that can have devastating effects, but also can have incredibly positive effects.

STEVE: We refer to Security Forces as defenders for a reason. They’re the protectors for all of us. It’s a big deal because we’d be hunkered down in our bases, deployed at different locations, and they’re the folks who are out there looking out for threats and keeping us safe while we prepare to fly our missions. Defenders are really a big deal in the Air Force.

SLILMA: Likewise it was very comforting for us to know we had eyes in the sky.

Why did you make the transition to a teaching career?

STEVE: I’m retired, so I don’t have to do anything—our country does a really nice job of giving you your retirement after your military career. It’s a very fair pay. But I had teachers in high school, old folks who are about my age now, who had been there and done that, and sort of guided me. I think they planted the seed for the things that matured when I was ready for them, things like national service, things like a community of interests where we come together and try to mold the future. Those are the kinds of ideas I wasn’t ready for at 18 years old, but I heard them. So it’s a circle, a karmic wheel we’re repaying, same for both of us. You come back around and you owe the next generation for the life you’ve had. And I’ve had a pretty darn awesome career and would like to give people insight into what that means, and the seriousness of what that means.

SLILMA: In a way we’re both still serving, still doing something that will benefit our country, and there’s a lot of pride in that.

What has student teaching been like for you during your credential year?

SLILMA: I’m teaching kindergarten at a Spanish-immersion school and I love it. I’m the oldest in my cohort, so it’s been a different perspective, seeing all these amazing young professionals. I could be their mother, but they take time to work with me and teach me. In return I feel like I have sort of an auntie or big sister role. It’s been a really good give and take. In some ways it’s been similar to being back in the service where you have that camaraderie and you know who has your back. I’ve formed a network of friendships that I know are going to be longstanding. It’s so exciting to find that where I didn’t expect it.

STEVE: My cohort members have been lovely as well. They help out the old guy, which has been nice. I’m teaching high school physics and biology and I’ve had some really memorable moments of connecting with students. I had a mom leave a message on my voicemail saying, “I don’t know what you’re doing in class but my ninth-grader has never come home talking about a class, but he’s says he’s kind of into yours, so keep doing whatever you’re doing.”

SLILMA: That’s exciting, to get that feedback.

STEVE: Yeah, it really is. I went, “I think this teaching thing is going to work out all right.” It felt good.

How does your military experience help you as a teacher?

SLILMA: I’m definitely drawing on a lot of things I learned and experienced. Persistence, definitely, and organization, and the leadership perspective. And I guess, I don’t know about you Steve, but you know the bad days…they’re not so bad. I’ve seen worse.

STEVE: Oh yeah, you have context. Also, I was the boss when I left the Air Force. I was a colonel and I had a couple of hundred people working for me, so I can command a room. Classroom management is not an issue for me. I can walk into the room and attract the attention of my students and keep them engaged. But I think that’s really a small part of what I bring to the job. As a commander, you have great insight into people’s lives—the wonderful things and the not-so-wonderful things, and you see people operating under all these conditions. And I think it sensitizes you. I know that what’s happening outside the classroom can impact my students’ performances and ability to engage with me. It allows me to have empathy for my students.

SLILMA: You’re right—I hadn’t thought about that. I’m in kindergarten so it’s like herding cats, but still you can definitely see what they bring from home.

Should other veterans consider teaching?

STEVE: Oh goodness yes. In the military you’re constantly learning new skill sets, and the Air Force itself is evolving, and that makes you flexible. So when you walk into a teaching program as a veteran, you’re receptive to continuing to be a student and learning. You have a storehouse of experience and knowledge and empathies that are ready at your disposal to apply to the new skills you’re learning.

Slilma: I agree. We’re constantly learning and growing—that’s the military in a nutshell. I ran training programs for Security Forces, I was a commander as well overseas, so there’s a lot that you learn. With Security Forces you’re always on the front lines, always teaching someone something—I could compare that to classroom management, it’s just one-on-one, so the transition into education is seamless, nice and easy.