Mark Schwartz is a faculty affiliate of the Center. This post, which explores integration of science and society through natural resource management, and gaps in scholarship that could help to advance this mission, appeared earlier this summer at Nature’s Confluence.

There are a bunch of books on science and the ivory tower and how scientists need to actively participate in reversing the pattern of scientists isolating themselves from public discourse. There are also a bunch of books on scientific illiteracy that speak to the need to increase the generaly understanding of science among people.  Conservation Science (CS) and Natural Resource Management (NRM) are ideal participants in this important venture to build a populace that acknowledges science as an important way of knowing; that there are rules to to good science; that we individually can and should look to science and judge whether what we read meets the criteria of good science and not let some website dictate to us whether some scientific finding is valid, important, trivial or maliciously false. I believe that CS and NRM are ideally situated to foster healing the divide between science and society through deliberate integration of science and society in understanding and managing natural resources.

About 15 years ago I was pushing for the California Native Plant Society to prioritize a volunteer stewardship model for rare plants innorthern California. I did not succeed. There were some logistic reasons (i.e., they had just made a strategic plan and this was not in it, and they were not going back. – fair enough). There were some philosophical reasons. Specifically, there was a deep mistrust of sanctioning volunteers to tend to what is in essence, a proprietary public good. The state and federal governments had responsibility for protecting endangered species, and it seemed like a bad idea to this group to entrust serious responsibility for at risk species to a bunch of rank amateurs. This was, of course, despite the fact that neither the state nor the federal government have the resources to do the stewardship that was needed, and the various Native Plant Society chapters were already engaged in this sort of work, largely using volunteers. I was a bit frustrated, but let it go and moved on. Now we see a variety of organizations were thinking along the same lines, probably for the same reasons, probably before I had the notion. These include Colorado’s adopt a rare plant, Florida’s, Minnesota’s, California’s and other Master Naturalist programs.

As I have thought about this issue over the years, however, I see this now as a much deeper and more integrated effort. I have this model in my head, which I have drawn out below. 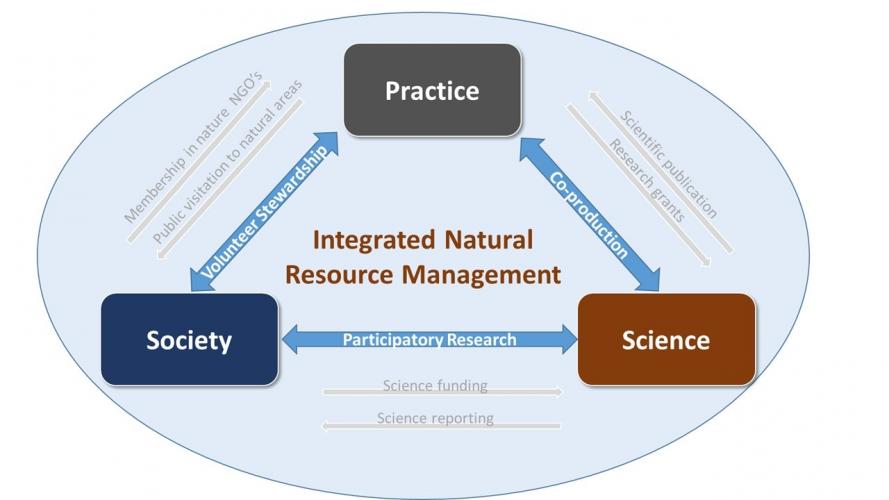 The idea is that we have a nexus between science and society on the issue of how we practice the management of nature. We have professional bodies in each group that are responsible for some portion of the interaction amongst the groups. The dominant pathways of ineraction over the past couple of centuries are shown in gray. For example, society funds science through government agencies such as the National Science foundation. In turn those scientists do science, which is reported back to society, largely by journalists. There are other feedbacks from science to society, of course. Many of these involve how society uses basic science to innovate new technologies. But for natural resources, we can think of this as reporting. Similarly, there are these relatively hands-off and barrier-laden transactions between science and practice and between the practice of natural resource management and society. However, there are serious movements in each case to build two-way channels of direct communication and action in these pathways.  We call these “participatory research”, “knowledge co-production”, and “volunteer stewardship.”

These three blue connectors are incredibly important ways to connect society to nature through involvement in the science as well as the management of nature. It is also a good way for science to more directly engage in the practice of managing nature, and for those managers of nature to more directly involve themselves in producing the knowledge they need to do their jobs well.

So, this is my vision of integrated natural resource management. Is it new? Well, I haven’t seen another figure like this, but clearly I am not proposing the invention of any of these pathways. They are well-established and rapidly growing. What I am trying to say is that they are inter-connected, and it seems like a really good idea, for example, to foster volunteer stewardship if we are also interested in knowledge co-production or participatory research. 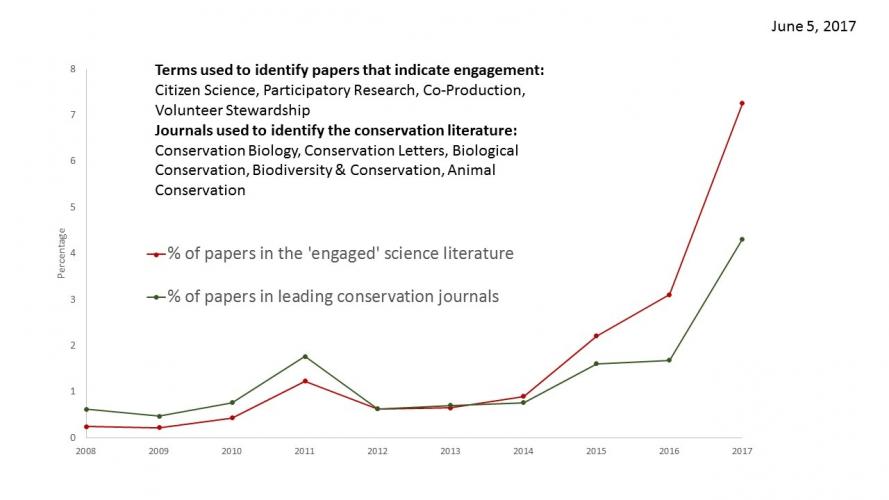 And to look into this, I did an ISI web of science search. This is a service that indexes scholarly journals. I did a simple thing. I asked how many papers there were that indicated some form of integrated engagement (see the search terms above on the figure; they are the same as on the previous figure). I then asked how many papers there are in the conservation literature. Well, this is very difficult since hundreds of journals publish some conservation work. But, I asked how many papers appeared, per year in 5 prominent ‘core’ conservation journals. I then asked what the percentage, by year, of papers using the keywords in conservation journals relative to all papers using the keywords (brown line), and percentage of papers in the conservation journals that use the keywords, relative to all papers in those journals (green line). These are imperfect searches, but there is no reason to suspect that they are biased searches. Hence, we find that there is a trend toward increasing use of these keywords in the conservation literature. The science is becoming more engaged. That is fantastic news.

Now the bad news. 107 of the 109 papers from conservation journals since 2008 that hit those keywords are hitting because of “citizen science” or “participatory research.” That leaves just two papers that represent scholarship on knowledge co-production (Nel et al. 2016. Conservation Biology 30:176-188; Winter et al. 2011. Biodiversity and Conservation 20:1673-1787); and none on volunteer stewardship.

OK, so hang on. That misses a couple of papers on which I was an author. So, clearly some papers get missed and the fractions of these literatures are higher. I tried expanding the search to include just “volunteer” and “boundary science.” Then I got my papers, and expanded the list to 133 papers, but the pattern remains.

My point is this. We need to increase our attention to reporting research on how boundary science partnerships among resource managers and researchers is going, and we need a research field on the use of volunteers in resource management.