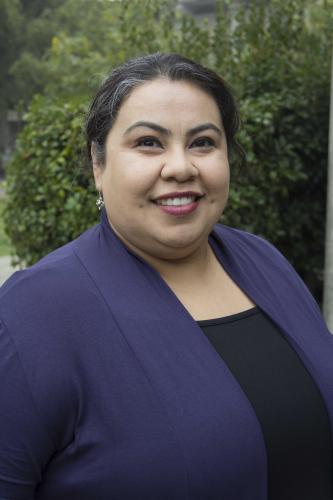 For Professor Marcela Cuellar, examining the transformative power of education has been a lifelong passion. “My parents moved to Oxnard, a coastal California town, in the late 1970s to work in the strawberry fields,” said Cuellar. “As the youngest of six children, in addition to Spanish, I learned English from my siblings and had a different trajectory because of it. I was placed into GATE early on, which led me to an advanced track in middle school and high school, and thanks to my experiences as an Upward Bound student, I was the first of my siblings to go straight into a four-year university.”

Cuellar was accepted to multiple schools, eventually choosing Stanford University. “Stanford was a different world than Oxnard,” she said. “I got to see a new world unlike my own and interact with a diverse group of students. It also brought to light how inequitable our backgrounds could be. I could see stark distinctions between where students were coming from and that very few students at Stanford looked like me. When I graduated from college, I knew that I wanted to help other students, especially students from my own community, have access to an education in the way that I had.”

After completing her bachelor’s degree, Cuellar jumped into working with historically marginalized students at a small Bay Area private school and then became an Upward Bound counselor at San Diego State University. “As I worked with more and more students after college, I started to deeply think about how education systems as a whole were helping students,” she said. “How do high school students transition to four-year universities, and how do universities support their retention? We’re preparing so many students to go to college, but are our colleges ready for them? I had all of these questions, and that led me to graduate school.” She went on to her PhD in Education with a specialization in higher education and organizational change from UCLA.

Cuellar has been an Assistant Professor at the School of Education since July 2014. Her current research examines student experiences and outcomes at Hispanic Serving Institutions, which are institutions where at least 25 percent of undergraduates identify as Latinx. UC Davis recently met the criteria to apply to become a federally designated HSI, and Cuellar served on the campus task force. HSIs can provide real benefits to Latinx students, she said. “I’m particularly interested in the holistic outcomes at HSIs, like levels of civic engagement, student self-perception and pathways to graduate school—the benefits of a college education beyond the grades. For me, higher education was a transformative experience, and it really changed my view of the world and what was possible for my future. I value the potential of higher education, and it is so compelling to hear from students that that is also what they’re seeking—an opportunity to expand their own perspectives and think about their ability to change the world. Grades matter and degrees matter, but there’s so much more to an education. I hope my research makes sure that we don’t lose sight of that.”

Marcela Cuellar joined the School of Education in July 2014. She received her doctorate in Higher Education and Organizational Change at the UCLA Graduate School of Education & Information Studies. Her research examines access and equity in higher education, Hispanic Serving Institutions (HSIs) and emerging HSIs, and Latinx student success. More specifically, Dr. Cuellar employs quantitative and qualitative methods to explore Latinx students’ experiences at HSIs and emerging HSIs and how they are empowered as a result of their educational experiences during college and beyond.