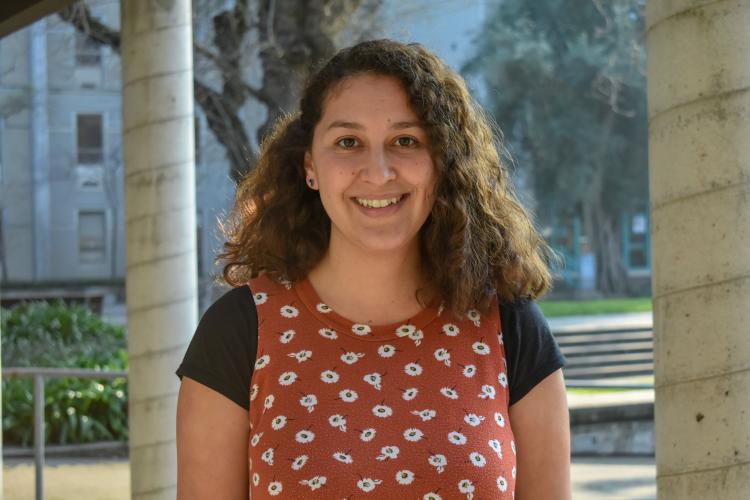 Nidia Bañuelos is a postdoctoral researcher at the School of Education.

What do you generally research? What research are you conducting right now?

I’m currently working on a project on the community college baccalaureate with Professor Marcela Cuellar and my own research on the history of for-profit colleges and universities (FPCUs). FPCUs are the schools we don’t think of as mainstream colleges and universities, but they actually are some of the largest institutions in the United States. Most students who are enrolled in postsecondary education are not attending a non-profit four-year college. Understanding where FPCUs came from and why they’re so popular is important if you’re interested in higher education.

What were the findings that you laid out in your new article, “Dangerous Metaphors: The Consequences of Treating Higher Education Like a Consumer Good?”

I was interested in writing this article after I started seeing interviews with Secretary of Education Betsy DeVos where she was equating people wanting choice in schools to ride share companies like Uber and Lyft. In this publication, I make the argument that the rhetoric around higher education as a product and a consumer good can be really dangerous when we think about designing policy to oversee for-profit universities. This idea originated in the 1970s, and it was one of the reasons why Congress decided to expand access to federal financial aid for for-profits. Before the 1970s, Congress said we’re not going to give any school that makes a profit access to federal student aid, and that kept for-profits small. After 1972, the decision was made to change the definition of higher education to include profit-making schools. That’s when you saw schools like the University of Phoenix and DeVry University getting really big. Those schools now rely on federal financial aid for most of their revenue.

For this recent article, I did archival work around the conversations that Congress was having—both on the record and with agencies that represented FPCUs—about how to defend granting FPCUs access to federal financial aid. Giving these companies access to thousands and thousands of federal dollars was not a popular idea. My article analyzes the rhetoric that was used back then, and what I found is that the rhetoric of the 1970s is very similar to the rhetoric Secretary DeVos is using now to de-regulate the industry and roll back Obama-era reforms around consumer protections against educational fraud. These are not new ideas. They’ve been around a long time, and the last time they were used resulted in regulatory structures that allowed FPCUs to not only grow big but to do some harmful things to students.

What else are you working on?

The work I describe in my recent article is part of a larger research project. I’m working on a book specifically about the 1970s and the big wins that FPCUs made in that decade. Before the 1970s, FPCUs were relatively small and not really considered to be competitors to colleges and universities. After the 1970s, they started to change their form and offer the same degrees as traditional universities. They expanded their reach, began making large profits and started being publicly traded. Each chapter of the book examines a win for FPCUs during this era and how these wins, coupled with the fact that there were some student populations not being well served by nonprofit institutions, really affected the entire landscape of higher education today.