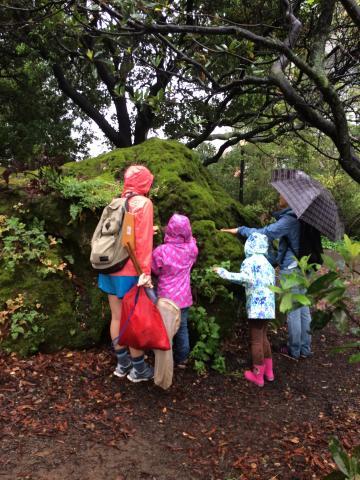 As bioblitzes get more common, we wondered: what kind of learning opportunities do they offer? In a recent field observation, we saw two completely different learning experiences in the same bioblitz event.

What is a bioblitz?

Bioblitzes — one day events where community members document all the species in one area using mobile devices — are increasingly being run by natural history museums and local and state parks. Bioblitzes are often used to document local biodiversity and provide opportunities for public education. With the help of volunteers, like local scientists, park rangers, or amateur naturalists, participants typically work in small groups of 6-10 people and use mobile devices to take photos of every living thing they see in a specific area. Photos are uploaded to a platform such as iNaturalist, where the community collectively identifies the species. Bioblitz data can be used to generate lists of species occurring at the site or other data for scientific studies.


Here we share two contrasting stories from the same bioblitz, and offer some lessons and suggested practices below.

1. Listening to an expert

Immediately following an introductory opening circle, we followed one group led by a scientist who studies bryophytes.  As the ten person group walked across a lawn and circled up, we paid attention to one middle school boy and his father.  The scientist started talking to the group about bryophytes, engaging them with a series of questions like “what is the difference between bryophytes and ferns?” and “There are 3 groups of bryophytes, who can name them?” For the next 15 minutes, he told the group about moss, liverworts, and hornworts, and passed around samples.  A middle school boy had been quiet throughout the presentation until he spotted a friend and they started chatting. The scientist continued his lecture and both boys and their parents eventually left the circle and headed home.  They had not taken any photos or explored any of the area on the campus and they had gone home after only 20 minutes.

Meanwhile, in a different group, a community leader took her group to investigate part of a creek. We we focused on a 5th grade boy and his dad as they explored the area. The group leader framed the activity, telling the group “Our goal is to document everything…we hope we can find 20-50 species as a group…is there anything you’re interested in finding?”  She told the group they might find salamanders because it was raining, and then lifted the cover of a nearby electrical box.  The boy and his dad peered in to find an Arboreal salamander.  The group leader carefully picked up the salamander with her hands and brought it to the boy to take a picture.  After this, the boy took the lead, continuing to open electrical boxes and look for salamanders.  When he found another salamander, he struggled to pick it up and three college students tried to help, handing the salamander to him up, but he declined, appearing nervous.  When he opened a third electrical box, he tentatively reached into the box and with the group leader’s help, held the salamander himself.  Over the course of the next 15 minutes, the boy and his dad explored the creek and used a net to catch things in the water.  He found and photographed an insect, a flower and a plant.  In twenty minutes, he took four photographs to contribute to science and overcame anxiety while holding a salamander in his hand for the first time.

Best Practices: The importance of the volunteer group leader

We witnessed two very different experiences for these young learners at the same bioblitz. The first boy had limited opportunities to engage with and discuss what he saw in the natural world because his group leader spent most of the time talking to the group about his area of expertise. The second boy was encouraged by his group leader to explore freely and had multiple opportunities to investigate and take photos.  This resulted in different ways of participating in and contributing to science.  We think the facilitation of the small groups played an important role in creating these different opportunities.  Because many group leaders at bioblitzes are volunteers, it is difficult to provide training or make clear how you hope they will engage participants in the bioblitz.  Many experts have extensive knowledge about the natural world and are eager to tell participants what they know.  However, this kind of sharing can limit opportunities to learn about the natural world through exploration, particularly when presented at the beginning of an event.  We suggest that bioblitz leaders hold a short meeting the morning of a bioblitz to outline a few clear messages for volunteer leaders.  Here is one example of key messages:

Encourage participants to explore, touch, ask questions, and talk to one another. Provide frames to guide observations such as “I notice…. I wonder”.  Make sure that participants spend most of their time talking, taking photos and exploring.

Teach natural history skills. It’s less important to teach participants actual species names than to have them think about the characteristics they should pay attention to and photograph. Remind participants that others will use the photographs to identify the species (e.g., when making an observation of a tree, photograph the whole tree but also get close-ups of the leaves, any flowers or fruit, etc.)