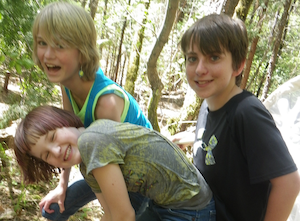 Appearing in the most recent issue of Citizen Science: Theory and Practice, “What Do We Know About Young Volunteers? An Exploratory Study of Participation in Zooniverse” examines how youth, mainly 16–19 years old, participate in online citizen science projects. The co-authors include Heidi Ballard, the Center’s Faculty Director, and other colleagues collaborating on the LEARN CitSci project, funded jointly by the National Science Foundation and the Wellcome Trust.

In 2016, the State Board of Education set out to change the way students learn science by adopting the Science Framework for California Public Schools. The new framework is designed to help students deepen their knowledge in four disciplines rather than having shallow understandings on many topics. It also emphasizes what students do with their understanding of science is more important than what they know. This significant shift in the curriculum can revolutionize how students learn and practice science, but it is crucial to prepare K-5 teachers for this transition. 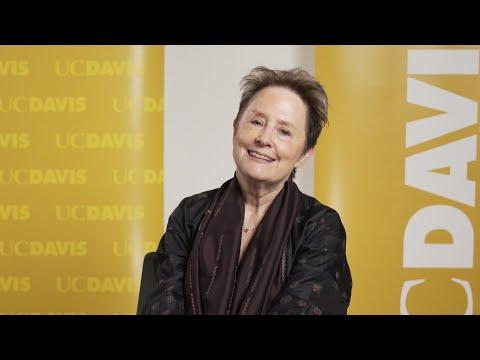 On Thursday, January 16th, UC Davis Chancellor Gary S. May announced an exciting new partnership with Alice Waters — founder of Berkeley’s Chez Panisse and The Edible Schoolyard Project. A farm-to-table leader, Waters has been vice president of Slow Food International for nearly two decades. Her new food institute, the Alice Waters Institute for Edible Education, will open at UC Davis’ Aggie Square in Sacramento, bringing together experts from across disciplines such as education, health care, agriculture, policy and business to innovate solutions for healthy, sustainable and equitable food systems. 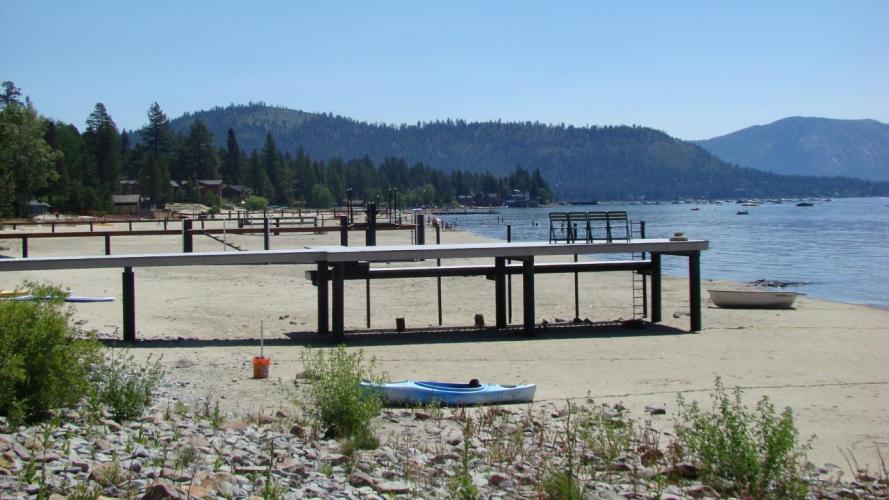 To anyone familiar with the research that goes on here, it will come as no surprise that the University of California, Davis, has a wide circle of influence. The Tahoe Environmental Research Center (TERC), located more than 100 miles from campus and just across the Nevada border, is a prime example.

For over 50 years, the TERC has performed groundbreaking research on many aspects of the Lake Tahoe Basin, from water quality to forest ecology. Increasingly, and with help from the Center for Community and Citizen Science (CCCS), this research is incorporating citizen science.

We are excited for the AGU Fall Meeting 2019 in San Francisco next week, December 9th-13th. Host of the world’s largest Earth and space science meeting, the American Geophysical Union is also celebrating its Centennial this year! AGU has become an important venue for work on a broad range of environmental topics incorporating education, policy, citizen science, and social science perspectives and approaches.

In early November 2019, KVMR’s Educationally Speaking program invited ​Sol Henson, the Educational Co-Director at Sierra Streams Institute, and our own Erin Bird to discuss the Youth Community Action and Science in Our Forests (“Our Forests”) project, now getting underway in Nevada County. The Our Forests project will train and support participating 3rd, 4th and 5th grade teachers as they work with their students, local environmental scientists and community organizations to study local forests and fire risk.

We are looking forward to our next Global CCS Collabinar! Please join us online or in-person for — 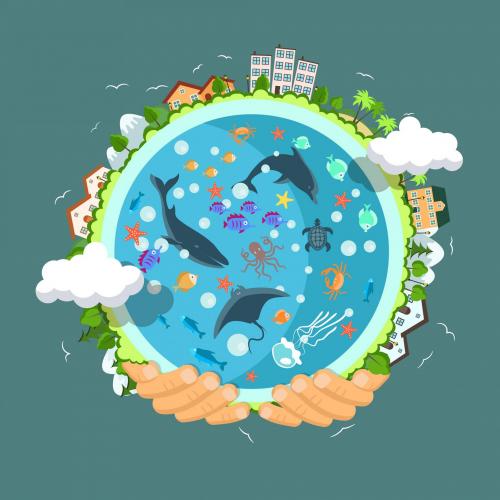 Dr. Rachel Kelly from the Centre for Marine Socioecology, Tasmania will present new marine citizen science research, and we will discuss developing programs to support the UN Decade of Ocean Science for Sustainable Development. Please see below and event flyer for more details and RSVP. 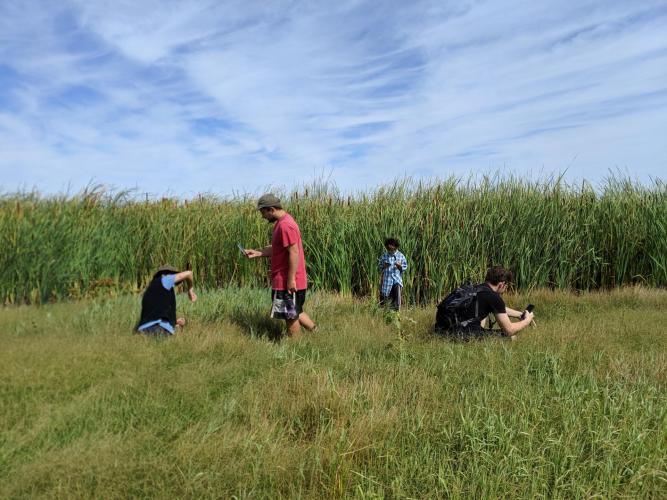 On September 7th, 2019, several members of the CCS team, including Chris Jadallah, Mackenzie Carter, Maryam Ghadiri, and Peggy Harte, participated in the 2019 California Biodiversity Day bioblitz. We joined at the Yolo Bypass Wildlife Area, located between Davis and West Sacramento. Biodiversity can be thought of as all of the different types of life on earth, from the largest mammals all the way to the smallest bacteria. California is a biodiversity hotspot, due to the wide range of habitats and climates across the state. As part of the celebration of California’s biodiversity, the California Natural Resources Agency and the California Academy of Sciences conducted 10 bioblitzes across the state. Bioblitzes are events where members of the community, naturalists, and scientists come together to record as many species as possible in a given area during a specified time frame.

The Yolo Basin was once an 80,000-acre wetland and home to a tremendous variety of species, many of which remain today. In the early 1910’s, the floodplain was converted into a bypass using a system of weirs aimed at preventing flooding in the Sacramento area. Human intervention dramatically changed the landscape, affecting wetland species and prompting ecological restoration projects. Today the Yolo Bypass Wildlife area encompasses 25 square miles of mixed-use land, including nearly six square miles of restored wetland and related habitat. For the bioblitz, participants explored the area, documenting species using cameras and cell phones. 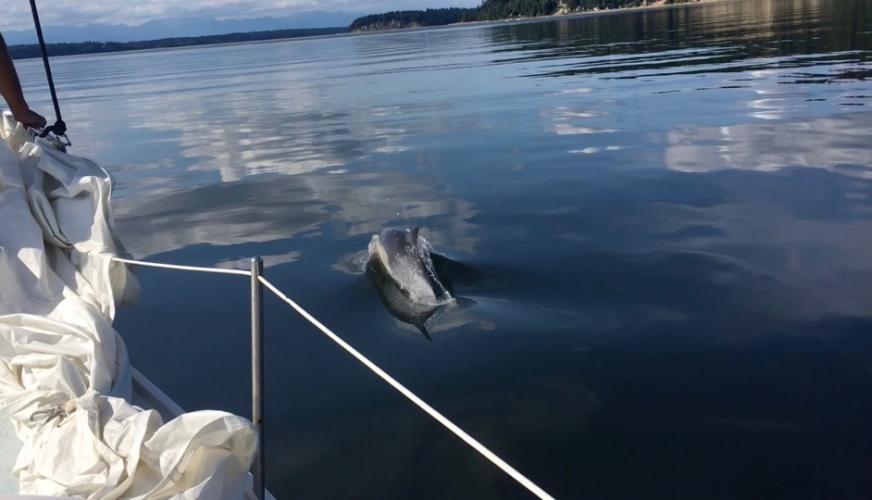 Two and a half years ago, during winter quarter of my freshman year, I approached the professor of my Introduction to the Oceans class after lecture. “I like sailing,” I said. “Do oceanographic expeditions ever take place on sailboats rather than motorized ships? That would be something I would be interested in.” My professor’s answer was a gentle no; larger, engine-driven vessels are a must for the sorts of multidisciplinary cruises that define modern marine science, she said.

In hindsight, her answer makes perfect sense. Maybe it was stupid of me to ask. Nevertheless, I look back on that question now as a sign of burgeoning enthusiasm for the field that, a year later, I would declare as my major. 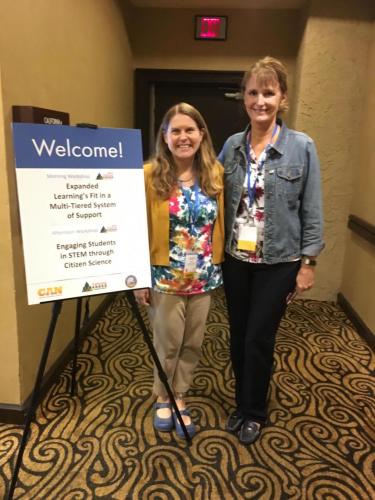 On October 1, the Center’s CCS Innovator Fellow, Peggy Harte, traveled with DeAnn Tenhunfeld to Sacramento to present at a California Expanded Learning Summit for after-school educators and administrators. Their talk, “Engaging Students in STEM through Citizen Science,” discussed citizen science’s growing role in elementary classrooms, and was attended by nearly 50 participants.

Position has been filled

The Center for Community and Citizen Science (CCCS) and the Center for Environmental Policy and Behavior (CEPB) seek an accomplished quantitative social scientist to lead a project focused on human use of coastal and ocean resources. The postdoctoral scholar will conduct analyses of data generated by MPA Watch, an innovative citizen science project in which volunteers collect data about onshore and offshore human activities along the California Coast (learn more at mpawatch.org). The position requires high-level statistical methods in R, including spatial models and the capacity to estimate models that include missing data and data that is only partially observed across geography. The role also involves working with state agencies and non-profit partners involved in the adaptive management of California’s network of marine protected areas.

For undergraduates looking to gain experience in science and environmental education, and community and citizen science, we’re happy to offer a few ways to engage. Contact Ryan Meyer to learn more, and join our team! 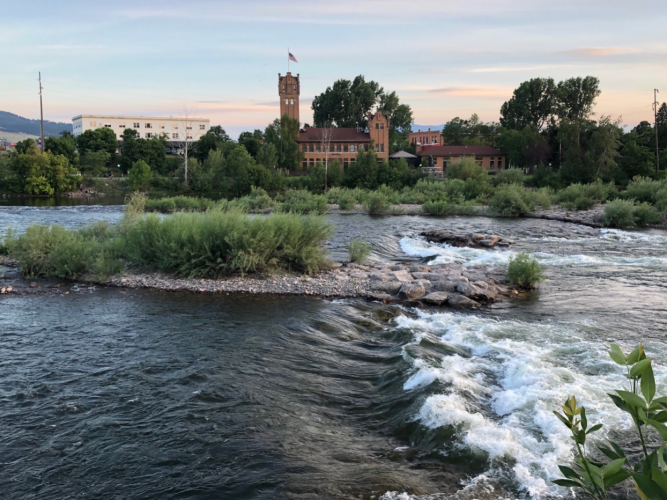 With support from the Open Rivers Fund, a program run by the Resources Legacy Fund, our Dams and Watershed Health team, Heidi Ballard, Ryan Meyer, and Chris Jadallah traveled to Missoula, Montana in July 2019 to observe and participate in the environmental monitoring associated with the removal of Rattlesnake Creek Dam. Through meetings and hands-on experience, we got an up-close look at both the promise and the challenges of monitoring collaborations focused on dam removal. 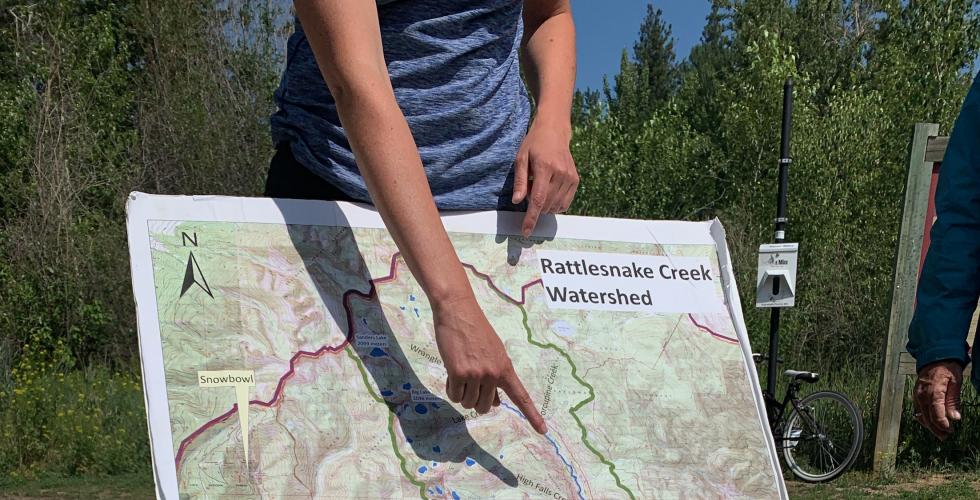 Originally built to provide water for the City of Missoula in 1904, the Rattlesnake Creek Dam was first constructed as a wooden structure and later converted into a concrete one. After problems with Giardia contamination in the early 1980s, a private utility took the dam offline and the City of Missoula converted to groundwater as its primary source for drinking water. 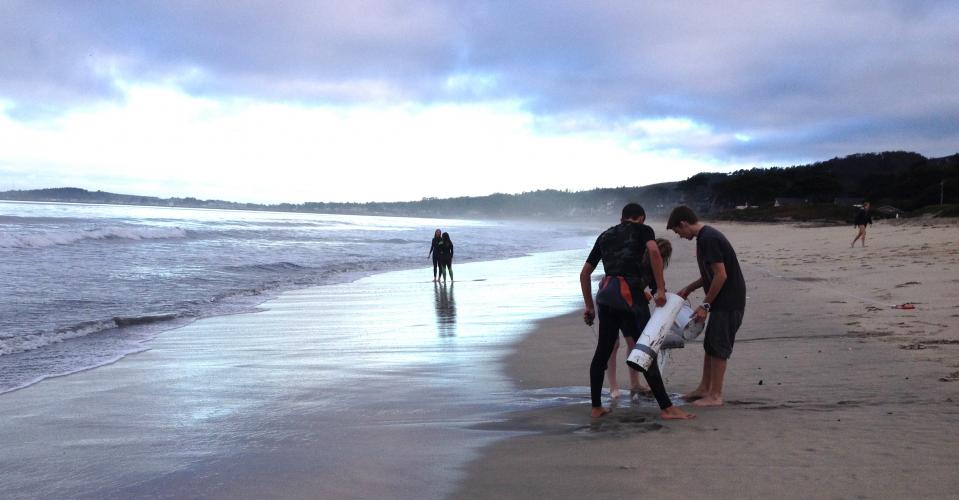 Citizen and Community Science plays a special role in efforts to conserve and manage California’s ocean and coastal resources. There is a huge diversity of projects and programming operating up and down the coast, which engage the public in science and monitoring, often with direct connections to policy and management processes.

The Center collaborated with the California Naturalist Program, educators in the Woodland Joint Unified School District, and a variety of local nature centers and reserves to encourage participation in the Sacramento City Nature Challenge. Despite being its first year participating in this global competition (as one of more than 160 cities worldwide), over 500 people in the Sacramento region logged 9,798 observations of over 1,200 unique species using iNaturalist.

This interview was originally published in Breakthroughs, the magazine of the University of California, Berkeley College of Natural Resources, under the title, “Q&A: When Science is Social— Alumna Heidi Ballard discusses opportunities for education and research”. 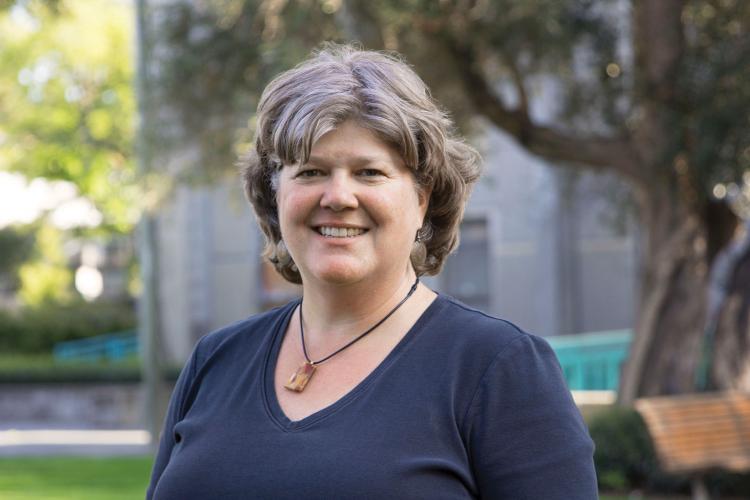 What was your path to where you are today, and when did you first become involved with community and citizen science?

During my years in higher education, I became fascinated with ethnobotany—the study of cultural uses of plants—as well as the emerging fields of conservation biology and sustainable development. Across all these fields, I was most drawn to studies that involved collaborative monitoring, where different groups of stakeholders—environmentalists, resource-dependent communities, scientists, and agencies—all came together to collect data. 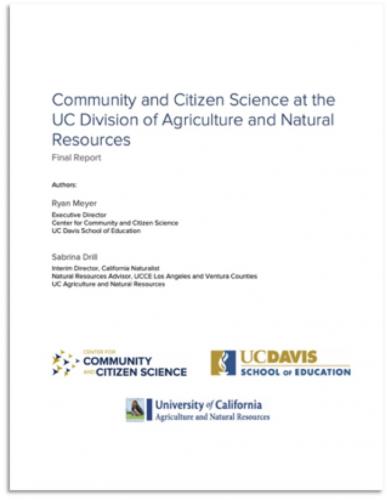 In late 2017, the Center for Community and Citizen Science began an assessment of public participation in research throughout the University of California Division of Agriculture and Natural Resources. The final report, “Community and Citizen Science at the UC Division of Agriculture and Natural Resources” is now available! Authored by our Executive Director Ryan Meyer and California Naturalist Interim Director Sabrina Drill, the report examines the status of community and citizen science at UC ANR and provides a roadmap for increasing UC ANR’s capacity for CCS. 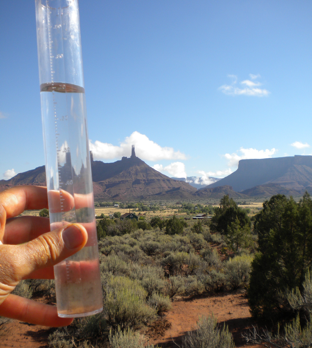 Governments and communities around the world are working to reduce their carbon footprints and mitigate the effects of climate change, but in some communities, climate action plans are stalling. A new report, “Evaluating Knowledge to Support Climate Action,” prepared by the Independent Advisory Committee for Applied Climate Assessment (IAC) with contributions from our Executive Director, Ryan Meyer, examines what it would take to develop a dynamic assessment process that helps affected jurisdictions, communities, and organizations establish pathways for climate action. Its recommendations are an important input to ongoing climate assessment and research in the federal government and elsewhere.

A role for community and citizen science

Bringing communities to the table and making sure they have the resources they need to adapt to new climate conditions is important, and community and citizen science play a critical role. This report hits upon the urgent need and exciting potential for diverse communities to participate actively in the science that supports climate adaptation and resilience. Participation through community and citizen science can address longstanding issues of equity and access that have for so long made science feel distant and irrelevant to many, even as the impacts of climate change loom larger and larger. Additionally, citizen and community science has the potential to close gaps in data-poor areas, shedding light on previously undocumented socioeconomic, ecological and health-related issues. 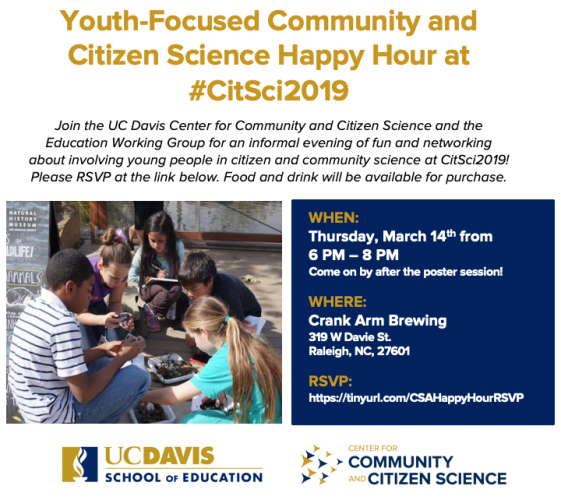 We’re looking forward to the upcoming Citizen Science Association (CSA) conference, right around the corner! Come catch up with us and our work at the events listed below. We are also excited to host a youth-focused community and citizen science happy hour alongside the Education Working Group on Thursday March 14th, from 6:00-8:00PM. It will be an informal evening of networking and discussing the involvement of young people in citizen and community science. See the image below for more information, and RSVP here. 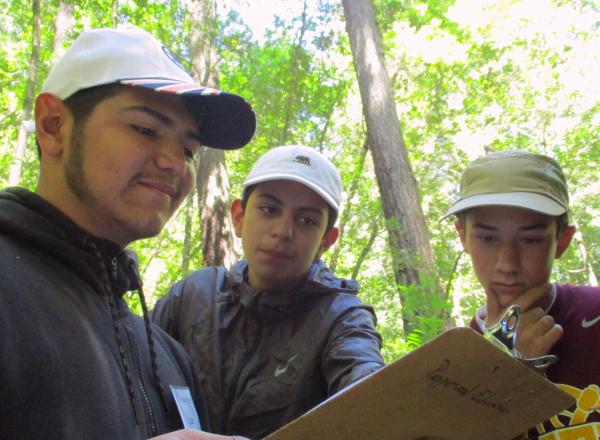